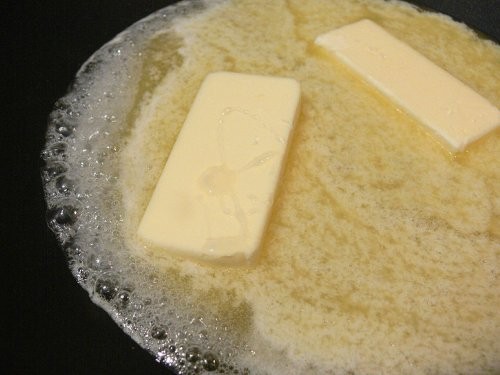 Update: A Norwegian blogger named Tommy recently posted a vlog where he expressed disgust at Americans who've been taking the crisis lightly. We're also pretty sure he calls us fat, and he mentions something about Norwegians eating cats. Check out the video after the jump.

Norway done goofed this year, hopping on the Atkins diet craze about 10 years late and depleting a lot of the available butter in the area. Low-carb, high-fat diets throughout the year paired with a rainy summer that affected livestock feed and milk production has left Nordic grocery stores looking like Paula Deen's worst nightmare. This is a problem, because, well, Norwegians want cookies on Christmas, too.

Butter is so scarce that online auctions are selling it at five times the usual amount, the equivalent of almost $12 for a single stick. A Russian smuggler was also caught last week with 200 pounds of butter in the trunk of his car as he passed into Norway.

Given the current butter crisis (tragedy, catastrophe, disaster, etc.) in Norway, Gut Check has compiled a list of our favorite buttery treats to pack up and ship over to all our Norwegian friends this holiday season.

6. Orange Cream Sugar Cookies We found this recipe from an online contest seeking recipes that portray a "successful use of butter as a main ingredient." This recipe certainly does just that, with a cookie consisting of a ratio of one cup butter to three cups flour, and a similar icing that calls for one cup butter to three cups powered sugar. That's two cups of butter total, the same as four whole sticks.

5. Mama's Pound Cake Obviously when making a list of buttery recipes, we couldn't leave out southern butter queen and Internet meme sensation, Paula Deen. Everyone's always heard that pound cake got its name because it's literally made with a pound of butter, and "Mama" doesn't disappoint. This recipe calls for two sticks of butter (plus more for greasing up the baking pan) and an additional half-cup of vegetable shortening to make this cake appropriately artery-clogging.

4. Butter Cookies It wouldn't be the holidays without them. And it wouldn't be a butter list if we didn't include the classic, ahem, butter cookie. This recipe calls for two sticks of the ingredient of honor, tossed together with some less regarded stuff to create those comforting, shapely, sprinkly holiday favorites.

3. Butterbeer OK, so maybe this recipe doesn't have the most copious amount of butter in the world, but nevertheless it's a beverage that contains butter (and butterscotch) and, frankly, we just want to feel like wizards when drinking it. There are about a thousand different ways to make butterbeer (including slightly boozy variations) that will make you feel all warm and cozy this holiday season.

2. Gooey Butter Cake Embrace it, St. Louis, we created something awesome. Gooey butter cake is a native confection that has spread joy to bakers nation-wide. Though we feel no one does it better than Gooey Louie, we found a recipe that can hopefully produce a worthy contender, using a full stick of butter and an 8-ounce package of cream cheese.

1. Fried Butter Balls As if the crown could go to anyone else. Paula Deen, once again, has created yet another recipe that would have Elvis Presley rolling in his grave. You're reading that right, folks. Pure butter, combined with cream cheese, rolled in bread crumbs and deep-fried in peanut oil. Feeling sick yet? Us, too. Another gem of this recipe is the user reviews. Go ahead, read them. You won't regret it.