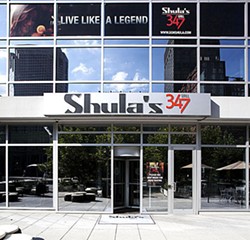 Tim Bryant of the Post-Dispatch was the first to notice the closure, and a lawyer for the Shula's chain told him that the company revoked the St. Louis franchise because the franchisee failed to pay employees.

Meanwhile, the lead story in the current edition of the St. Louis Business Journal (by former Riverfront Times intern-turned-ace reporter Amir Kurtovic), reveals that the business empire of brothers Steven and Michael Roberts is "mired in liens."

The restaurant's phone number remains connected, but Gut Check's calls to find out what, if any, future plans for the space there might be have gone unanswered so far.