Like any red-blooded American, Gut Check uses liquid medication to cope with holiday stress. Not only does a good winter cocktail make it possible to tolerate family members, say, inquiring about your procreation plans, it helps keep you warm, too. From now until Christmas, we're calling upon local drink-slingers to suggest great cocktails to get you through the season. Some of them are holiday-themed, some traditional, some not so much, but they all share one common thread: delicious potency. 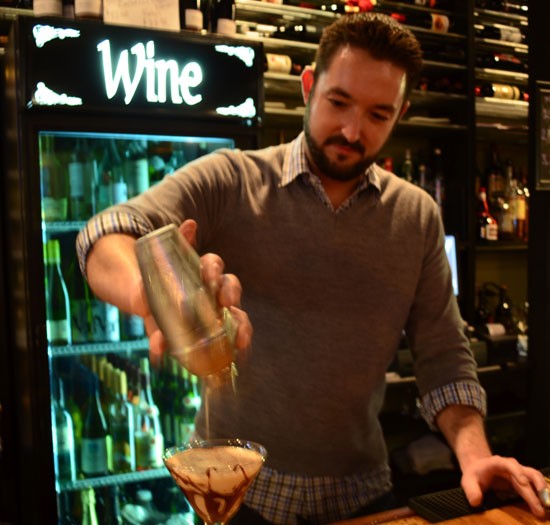 What better place to get a holiday cocktail than at the North Pole? Okay... Ferguson isn't that far north, but Cork Wine Bar (423 South Florissant Road, Ferguson; 314-521-9463) does hold the key to your Christmas dreams: more than 100 wines, 25 of which are available by the glass; wine flights for those who want to learn; 30 different beers by the bottle, plus four rotating draft beers (they currently have Southern Tier Pumpking on tap, for instance). Cork also hosts a jolly assortment of friendly strangers who will become fast friends in this laid-back, warm neighborhood bar.

And then there's the Tiramisu Martini. It contains "RumChata", a popular new horchata-influenced liqueur, and some house-infused espresso vodka. Corner Coffee House right down the street is where Cork gets the espresso for its infused vodka. Bartender Brad Gittemeier explains that Cork adds some ground espresso beans to 360º Vodka, lets it sit for 30 minutes, and then strains it.

RumChata, as Brad describes it, smells like Cinnamon Toast Crunch, and it tastes creamy, sweet and cinnamon-y (you know, like horchata). The espresso vodka balances out the sweet RumChata with it's bitterness, making a lovely -- though still quite sweet and dessert-like -- comfort drink for these cold winter nights. It's like Santa dunked his oatmeal cookies in spiked coffee.

Combine the RumChata and Vodka in a shaker with ice and shake until cold and blended.