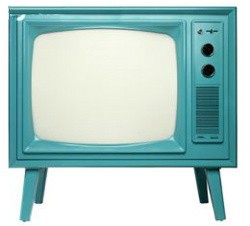 Gut Check has begrudgingly accepted the sad fact that there will often be an illuminated screen of one type or another shoved in our faces when we eat. Sometimes it's a date that won't put his damn iPhone away, and sometimes there's a blaring flatscreen in every nook and cranny of a restaurant. No, we don't simply dine at sports bars and wing joints, either. We're talking about decent places with nice decor that really should not have a television, much less eight of them.

But, what can you do? It's an ugly, tacky sign of the times.

So, we deal with it when we, mid-sentence, catch our friends staring past us and at a Jersey Shore rerun. Because, rude as it may seem, it's nearly impossible to ignore the screaming flash of the screen (and orange tans), especially when the set is situated just behind/right next to your dining partner's face.

What we can't deal with, however, is a restaurant -- not a bar that serves food, a restaurant -- that has two televisions on display in the dining room and doesn't pay attention to what's on them while we're attempting to enjoy our sesame tofu.

Give us a King of the Hill rerun, Wheel of Fortune, an addictive VH1 countdown. Something food-friendly, please. And for the love of God, don't let Dr. Oz come on while people are trying to eat.

We'd never actually watched Dr. Oz (just a few clips that had been sent our way and a Saturday Night Live sketch) but evidently it stars a playful doctor who's really into juggling human body parts. Sure, it's probably educational as hell, or whatever, but why the fuck is this guy always carrying around pounds of human fat or tumors? A friend sent us a link once to an episode about pelvic prolapse. Do you know what that is? Google if you dare.

Imagine our surprise when, while taking a bite of our lunch the other day, we looked up at our friend, and behind her head saw the good doctor fondling a human colon.

Thankfully, the restaurant's employees at least had the good sense to mute the idiot box, leaving our ears exempt from the trauma our eyeballs endured. However, there were closed captions. Oh, there were. And while we averted our eyes as quickly as possible, we couldn't ignore that the word "poop" appeared in the dialogue. Twice! In one sentence!

We climbed onto a chair, gagging, to reach the power button. Meanwhile, two servers stood at the back of the restaurant, chatting and watching the same thing on another screen.

So restaurant owners, we get it, your patrons demanded it: Televisions. Perhaps, many televisions. But please, we beg of you: Pay attention to what's on them. We're significantly less likely to order dessert if we puke mid-entrée.