Daiya Vegan Cheese is Animal-Friendly, but Is It Fat Phobic?

Thanks to social media, corporations and public figures can now embarrass themselves (often by sticking their stinky, figurative feet right into their metaphorical mouths) more easily and more often.

While this is usually entertaining (hello, intentional nip slips!) and often illuminating (à la Alec Baldwin's airplane iPhone entitlement), the frequency of big-shot blunders means that some of them fall below radar. 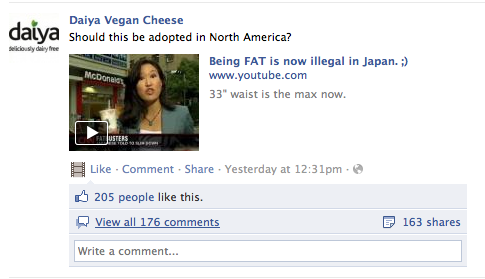 Of course, it didn't go entirely unnoticed. With nearly 200 heated comments on the post itself (not to mention the dozens of comments all over Daiya's page) and even more "likes," it's clear that many interpreted "Should this be adopted in North America?" as "Wouldn't it be nice if this was adopted in North America?" After all, why is now the time to post a video that's been sitting on Youtube since 2008?

Daiya Foods believes that each individual is unique and must be respected equally and never judged. We realize that by posting this video, some of our fans have been offended and for this we sincerely apologize. Our intention was to foster open dialogue and certainly was never meant to promote negative stereotypes. We have learned a huge lesson from this experience today.

What do you think? Was Daiya's post fat phobic? Does it just appear that way in light of the fat phobic comments it inspired?