Chipotle Unveils ShopHouse Southeast Asian Kitchen -- But Will St. Louis Ever Get Its Noodle On? 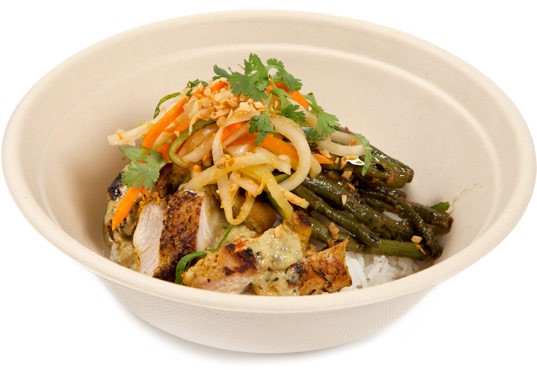 The fast-fooderati are abuzz about ShopHouse, the brand-new, Asian-themed, fast-casual spinoff from Steve Ells, founder of the empire known as Chipotle Mexican Grill. The first ShopHouse Southeast Asian Kitchen opened its doors last month in Washington, D.C. (Click that big ol' link back there to read first impressions from the food blogger at our sister paper the Village Voice, who happened to be in D.C. around that time.)

Pardon Gut Check if we're not, you know, all atwitter.

Don't get we wrong: Gut Check has a healthy respect for Ells.

Dude opened a burrito joint in Denver in 1993, leveraged it into a three-link chain two years later and now helms a publicly traded (CMG) company, a fast-casual Tex-Mex juggernaut with more than 1,100 locations and a market cap of $10.4 billion. (As in billion.)

So that takes care of the respect part. The healthy aspect came in the door around the turn of the century, when Ells began to educate himself about the realities of American meat production and vowed to wallow no more in the factory-farm dungheap.

And now the meats are all sustainable and stuff and the beans are organic (well, some of them anyway), and they ask you at the counter if you mind that the pintos are cooked with bacon. And yeah, the burritos are pretty good and the kitchen crews seem pretty happy to be there and blah blah blah blah blah.

We said we respect Steve Ells. That doesn't mean we like him.

What's not to like? you ask, as you munch happily on your organic bean.

Well, remember that stuff about exponential expansion? By 2005 there were more than 500 Chipotle Mexican Grills nationwide.

And not a single tortilla-flattening one of 'em here! In fact, St. Louis didn't get its first Chipotle until 2007, by which time residents of podunks like Columbia and Kansas City had been bellying up to the burrito bar for years!

The only thing Gut Check wanted to know when ShopHouse officially opened for business was whether we have to wait fourteen years to find out if the place is any good.

According to press materials, the ShopHouse concept stems from the ubiquitous shophouses found throughout Thailand, Malaysia and Vietnam, "classical two- or three-story buildings where families live upstairs and run restaurants or fresh markets on the ground level."

As at Chipotle, patrons will move along a service line. Instead of burrito fixins, however, they'll see beef, chicken and pork (antibiotic-free, no hormones, sustainably raised, you know the drill) and organic tofu, along with fresh vegetables, sauces and garnishes to top bowls of either noodles or rice. (Chipotle restaurants recently added brown rice to its lineup; ShopHouses are following suit.) Banh-mi sandwiches are also available. Entrées are priced similar to Chipotle's, at about $7.

When is St. Louis slated to get a ShopHouse? Your guess is as good as Gut Check's. But if Chipotle corporate's (utter lack of) response to our requests for enlightenment are any indication, 2025 looks like a possibility, though we'll set the over/under at 2014.