Getting Maced in the Kitchen

History: Mace is the webbing that encases a nutmeg, itself a kernel from the fruit of the Myristica fragrans tree, a species native to the Spice Islands. Mace and nutmeg were so valuable there that it was once traded for food and clothing. The Crusades brought the spices to Europe, and the Portugese were the first to broadly popularize their use in the 1500s.

When the Dutch uprooted a bunch of the trees from the Spice Islands during the delicious-sounding spice wars, they replanted them on islands under their control. The trees thrived. So much so that, to keep demand for mace and nutmeg high, piles of the spice were burned in the streets of Amsterdam. Eventually control of the Spice Islands was seized by the Brits, and by the 1700s people commonly carried nutmeg graters with them to season their food and drink on the go.

Today: Nutmeg (and mace) is primarily found in the West Indies, where the English planted trees in the eighteenth century. Nutmeg and mace are still often featured in Dutch recipes, and nutmeg graters are staples of many Dutch kitchens. Mace is said to enhance foods as varied as seafood, desserts and egg dishes, but in large amounts can cause hallucinations or death. 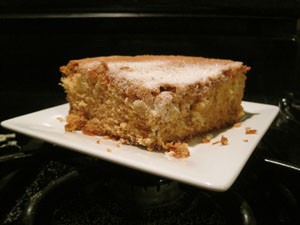 In Use: Whole mace is one of the coolest-looking spices out there, and it will give you mad kitchen cred if you have it on hand. After all, it takes 450 pounds of nutmeg to get just one pound of mace. But be warned: Not many recipes call for mace, and even fewer call for it whole. And it can kill you.

Though mace is somewhat fragile, it's a pain in the ass to grind without the aid of a spice grinder. Pestles, mallets, zesters, rolling pins and fine-mesh sieves didn't quite do the trick for Gut Check, and if you bite into even a large-ish piece of mace, it's sharp and astringent, like how nutmeg extract might taste.

The terrifying-sounding yet simple-looking mace cake above was tougher to make than its boring appearance might suggest. A step in the recipe calls to beat the eggs, milk and flour for fourteen to sixteen minutes, and then there's the issue of trying to grind down the mace, all for what turns out to be a ho-hum, somewhat dry coffeecake.

Mace: Buy it ground for occasional use, whole if you're a showoff. Or if you actually know what to do with it.

We found a one-ounce bag of mace blades at Penzey's Spices for $3.29.