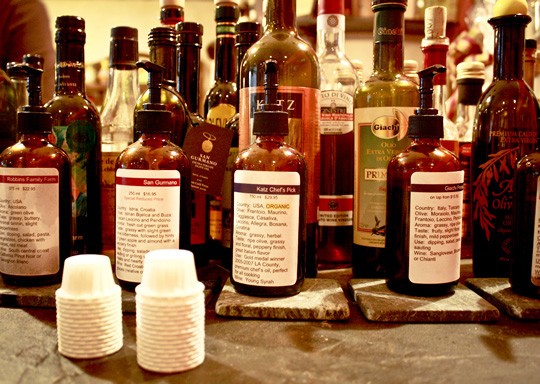 View a full slideshow from Extra Virgin here.
On a rainy Sunday afternoon, Gut Check wanders through Clayton's Carondelet Plaza to meet Marianne Prey, owner of Extra Virgin: An Olive Oil Ovation (143 Carondelet Plaza, Clayton; 314-727-6464). Prey's store is small but inviting, reminiscent of an old Tuscan village. The décor is rustic, and the products are arranged with care.


"One of my first food memories was of olives," Prey says, sitting on a bench by the single cash register. "I was four years old, and my mom was pregnant with my sister and craved salt. We'd sit on the couch and watch soap operas, and eat green olives. When the olives ran out, we'd drink the juice."

Prey's mother introduced her not only to the taste of olives, but also to the smell of olive oil. She savored her mother's and grandmother's cooking, and counts these memories as her earliest inspiration for her eventual occupation.

Prey pursued a career in medicine, which introduced her to her husband and, eventually, led her to a residency in St. Louis. After practicing medicine for eighteen years and raising two sons, Prey decided to change career tracks and open an olive-oil retail store: "I was coming up on my fiftieth birthday, and I wanted a new challenge. My youngest son was heading off to college, and it felt like a good time."

Prey left the lab in January 2007 and prepared to open her new store in downtown Clayton. In order to educate herself about olive oil, she enrolled in an intensive two-day session at the University of California, Davis Extension School.The class covered everything from the anatomy of taste to the economics of olive farming, giving Prey a good foundation for her future business.

"I took the class to see if I could make a distinction between flavors, so I could help customers," Prey explains. "As part of the class, we tasted about fifty different oils. Given my background in science, I wanted to make sure I had a good, strong knowledge of olive oil that I could carry over into retail."

Prey's olive expertise is apparent. The store carries more than 30 different types of extra virgin olive oil alone, in addition to 20 varieties of flavored oils and 30 different vinegars. The store's diversity of products sets it apart from many retailers, Prey says, as other olive-oil stores in the United States focus more on a single type of oil.

To find the best product Prey attends two major shows annually. The International Housewares Show is held in Chicago, and the Fancy Food Show meets twice a year, in San Francisco, Washington, D.C. or New York. Artisans, distributors and merchants from around the world bring their goods, and Prey uses the shows to research products and make new connections.

After four years of attending conferences and gaining product knowledge, Prey has expanded her store to include not only oils and vinegars, but also products that are directly connected to olive oil. Her shelves are stocked with Italian pastas, Israeli honey made with olive oil, Polish serving platters, and ceramics and glass from local artists.

"We easily have three times the volume of product, in terms of the number of items, breadth and scope," Prey says. "When I look back on photos from when we first opened, the store looks so empty."

Despite her vast assortment of products, it is clear that Prey's true passion lies in oils. She proudly displays her collection of extra-virgin olive oils to the side of the cash register, with small tasting cups available for sampling. She seems completely at ease discussing the product, but says that it took time to be able to distinguish between the oils.

Prey hopes to grow her business in the upcoming years and be seen as a "go-to" resource for cooks throughout the area. When asked about her proudest professional moment, she reflects and then responds with a smile.

"It's not just one moment -- it happens over and over. People are new to the store and leave here thanking us for such a great experience."

Check back tomorrow for a recipe from Marianne Prey.