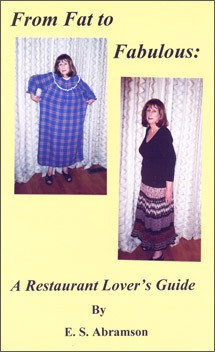 Elaine Abramson of Hazelwood believes she has stumbled onto the world's latest, greatest miracle diet and the salvation of the restaurant industry. Over the course of a year, Abramson dropped 50 pounds and ten dress sizes, all by eating only at restaurants! She describes it all in her new self-published book, From Fat to Fabulous: A Restaurant Lover's Guide, and adds that if everybody followed her example, we'd all be thin and fewer restaurants would close.

If only we could be so lucky!

The noble experiment began, Abramson tells Gut Check in a phone interview, when she started having problems with her knees, due to her excessive weight. "I couldn't stand long enough to cook," she says. "My husband started taking me out to restaurants. He's a very wonderful man."

It must be noted that Abramson was never much of a cook to begin with -- the introduction to her book lists, in loving detail, several of her worst culinary catastrophes -- so this may have been an act of self-preservation on Dan Abramson's part. Nonetheless...

After a few weeks of exclusive restaurant dining, Abramson noticed that her clothes were becoming loose on her.

"I started writing down what I was eating," she says, "and I began to see a pattern." Gradually her eating habits started to become more regimented.

"I do not eat low-fat food," she says. "I do not like the taste. I order straight off the menu. I definitely do not eat fries. I substitute steamed vegetables, salad or grilled vegetables. I don't eat bread, bacon or ham. I do a lot of substitutions and adding extras. I double or triple the amount of salad dressing because I like the taste. I don't count calories, carbs or trans-fats."

The rules that she lays out in her book, though, are a bit more complex. She also doesn't eat shellfish, fish, pasta, potatoes, rice or dessert. She always checks with her server to see if a food item is breaded. She asks that all her food be prepared fresh. She trims the fat from all her food. She doesn't add salt. She orders all sandwiches open-faced and uses the bread to soak up the extra fat and grease. She drinks lots of coffee, herbal tea and water. She shares appetizers and side dishes with her husband and usually eats only about half of her entree; she takes the rest home in a doggie bag and heats it up in the microwave for breakfast.

She deviates from these rules only on "reward days," which happen twice a month, and on special occasions, such as her birthday. Her one regular indulgence is two small pieces of dark chocolate every afternoon. (She prefers the Lindt Intense Orange bar.)

It's been two years since she started her new regime and so far, she's managed to keep all the weight off.

However -- the restaurant diet has yet to work for anyone else.

"I think it will work," she insists. "My friends keep trying, but one of them cheats."

And what about this helping-the-economy thing? "I know a lot of people who are afraid their restaurants will go under," Abramson says vaguely. "This would bring people back in."

And what about those of us who can't afford to eat all our meals in restaurants?

"I haven't really thought about the people who can't afford it," Abramson admits. "Most people I know are middle-class, and they're afraid to eat in restaurants because they think they're fattening."

Well, isn't all the fattening stuff part of the fun of eating a restaurant meal every now and again?