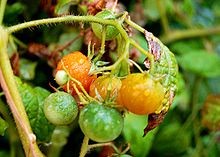 St. Louis-based produce distributor Front Row Produce is recalling ten-ounce and ten-pound packages of its grape tomatoes after potential salmonella contamination was discovered at the Mission, Texas, farm where they were grown.

The tomatoes are distributed exclusively to local Aldi grocery stores. You can view the lot numbers of the recalled tomatoes on the FDA website.

The contamination was found during random testing, and no illnesses have been reported. Front Row will begin affixing green stickers on packages of uncontaminated grape tomatoes -- any unmarked packages should be avoided and considered part of the recall.

Gut Check reached out to Front Row Produce, but a representative for the company declined to be quoted on the record and would tell us only where the recalled tomatoes had been distributed.