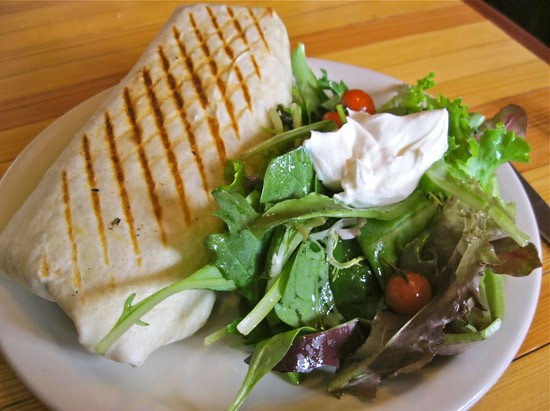 On Cherokee Street hungry diners can find a burrito for any time of day or night, and the Mud House(2101 Cherokee Street; 314-776-6599) has your breakfast needs covered with a veggie breakfast burrito that's almost too big for its plate.

A giant flour tortilla is stuffed with black beans, tomato, cheese and egg. The eggs are scrambled and soft and meld perfectly with the black-bean chili. Combined, the eggs and beans provide a Mexican kick without being too spicy -- this is only the first meal of the day, after all. The black beans avoid being too firm or too mushy, and provide a welcome protein substitute for meat.

The veggie burrito is served alongside a simple salad of greens and homegrown tomatoes, with a dollop of sour cream on top. The tortilla is kissed on the grill, giving it a slight chew. It's all nicely packaged and contained, but once you cut into this massive burrito, it's contents spill forward and everything on your plate is covered in egg and bean.

This burrito is a nice change of pace from the usual morning scramble, and it's big enough to keep you full for hours. Trust us, you won't miss the meat -- but, if you must, you can order it with bacon.