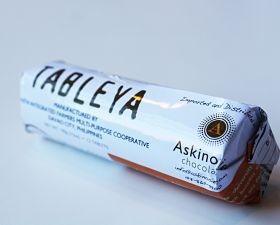 The do-gooding tendencies of ​Askinosie Chocolate are as much a part of the company as the chocolate itself. Owner and proprietor Shawn Askinosie has long made it a point to share the Springfield-based company's profits with the farmers in Africa, Central America and the Philippines who grow the cacao, and he's made it a point to donate his time and money to the schoolkids of Springfield and invite them into the factory to learn about the chocolate-making process.

Now Askinosie has manufactured its first product solely for the benefit of others, in this case, the students of Malagos Elementary School in Davao, Philippines, one of the regions from which Askinosie sources its beans: Tableya, a hot chocolate drink.

Unlike Askinosie's other hot-chocolate products, which are powders, Tableya is made from cocoa beans that have been roasted and ground and pressed into tablets that dissolve in hot water. Also unlike Askinosie's other products, it's made and packaged in Davao, by the Parent Teachers Association at Malagos School, and shipped to Askinosie's Springfield factory with the beans. All profits from Tableya will go toward establishing a school hot-lunch program.
During a sourcing trip to Davao, Askinosie discovered that many students at the school suffer from malnutrition. He arranged to buy 800 units of Tableya from the PTA for $1 apiece and sell them for $10; the $9 profit translates into a year of lunches for 579 kids. Askinosie estimates that one packet of Tableya equals 232 meals.

Lunch, alas, does not consist of chocolate. Instead it's a fortified soy rice meal, prepared daily by members of the PTA.

As for the Tableya itself, Askinosie educator and spokeswoman Mallory Roth describes it as "very thin, not thick like hot chocolate. It's very refreshing. It's equal parts cocoa solids and cocoa butter, which gives it a nice mouthfeel. The beans have notes of vanilla, browning sugar, toasted almonds and a subtle floral character."

Tableya is currently available on Askinosie's website and also at the company's factory storefront, should you ever find yourself in Springfield. Roth says it's available to wholesalers, too, but there will be no wholesaler discount because all the money will be going to the school.