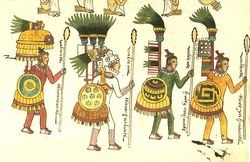 Looks like I'll be filing many, many more editions of my "Food Truck Fever" reviews.
- George Mahe of St. Louis Magazine reports that a new food truck called Hot Aztec is preparing to roll out. The truck will feature Mexican cuisine, though its dishes will focus more on the cuisine of Mexico City and the country's south rather than its north.
- Sauce Magazine has word of two new trucks: SteamrollerSTL, selling steamed-bagel sandwiches, and Taste-D-Burger, selling...wait for it...burgers. According to Taste-D-Burger's Facebook page, these will be thin burgers (like Steak 'n Shake), with hand-cut fries.
- Finally, just as an aside, I happened to walk by the new Zia's food truck the other day, and this thing is a beast, with a big ol' stockpot on its burner for cooking pasta and even an ATM where the passenger seat should be.