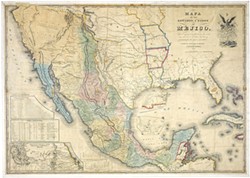 My Post-Dispatch counterpart Joe Bonwich reported yesterday on a new restaurant coming to the former Blockbuster space near the intersection of Olive Boulevard and Chesterfield Parkway West in Chesterfield: Fiesta Modern Mexican.

(No relation to Milagro Modern Mexican in Webster Groves, and Milagro owner Adam Tilford tells the P-D that there will be no Mangia-esque or Taste-esque controversy about the similar name.)

Today, Gut Check was able to chat with John Signorino, one of the three partners behind Fiesta.
"We're not putting in the normal Mexican restaurant you see in St. Louis," Signorino says. "We're trying to do a more modern, elegant [restaurant]."

"Not to the point of of white tablecloths," he adds. "We still want a family atmosphere."

The signature décor will be framed prints by contemporary Mexican artists. The menu is still being developed. (The three partners have not, as of yet, hired a head chef.)

This is Signorino's first restaurant. However, one of his fellow partners is also a partner in the Crestwood Mexican restaurant El Agave; the other, who will manage Fiesta's daily operations, is a native of Mexico and has managed several restaurants in Missouri and Ohio.

Look for Fiesta to open in late January or early February.