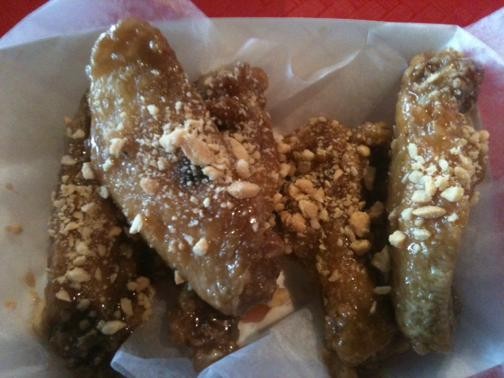 It's been two weeks since the Cardinals won the World Series. So where's the Rally Squirrel?

Chef (and owner) Bobby Tessler's wings are fried without breading or batter, which results in a crisp skin and juicy interior. The "Rally Squirrel" wings have an extra crunch, thanks to a sticky, caramelized peanut sauce and a scattering of chopped peanuts.

The "Rally Squirrel" sauce is reminiscent of Thai peanut sauce: a layer of sweetness followed by the richness of toasted nuts and a hint of something else (toasted sesame, perhaps?).

The wings aren't swimming in sauce. Instead, the light coating accents the meat's natural flavor. Make no mistake, though: These are wings. There's a roll of paper towels on your table for a reason.