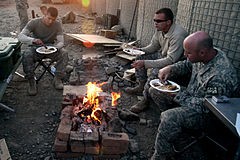 Talk to any veteran, and there's a good chance you'll hear about military food, from mess halls to MREs, food drops and sharing with the needy, and of course the local eats from the far-flung places where they've served. Eating with American-style abundance is one of the many sacrifices troops make while serving their country.

For Veteran's Day, here's a video peek into the food lives of troops.

Just how do they get food into submarines that are under the sea for months at a time?

Thanksgiving prep for troops is a big undertaking that no longer involves the dreaded phrase "turkey roll."

The official Army video gives their take on what happens in mess halls.

Marine Corps mess halls get the same scrutiny as the soldiers. When the military feeds others: How the Air Force makes a food drop over Haiti.

A panel of World War II and Vietnam vets recall the worst things they ate while enlisted.

Spend enough time deployed in foreign lands, and you develop a taste for the food. Some soldiers partake in Iraqi food.

And there's the dreaded MRE. A reporter in Afghanistan discovers that the chili mac isn't too shabby. Only the best for our troops.