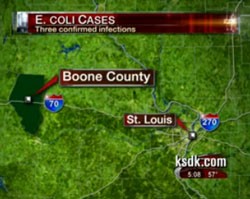 Since last Thursday, the confirmed cases of E. coli in the St. Louis area have increased from 16 to 30. Investigators still haven't found the source of the contamination.

Four cases of E. coli have been reported in Boone County, Missouri, and aren't thought to be related to the St. Louis outbreak.

There's also an E. coli outbreak brewing in a Colorado jail. Six inmates at Arapahoe County Jail in the Denver area have confirmed cases of e.coli. Fourteen other inmates are showing symptoms.

On Friday, Illinois Senator Dick Durbin spoke with culinary students at Southwestern Illinois College in Granite City about threats to the Food Modernization Act. He spoke to students about how the act would protect the food supply.