McRib Targeted by the Humane Society

It's the most wonderful time of the year - McRib season! But not everyone's thrilled with the pressed pork patty's annual appearance. The Humane Society of the United States has filed a complaint against pork giant Smithfield Foods, which supplies pork parts for the McRib, for mistreating pigs and leading consumers to believe they're on the up-and-up with a promotional video featuring animal expert Dr. Temple Grandin.

A Humane Society undercover video has a vastly different tone with a different message from Dr. Grandin.

The truth? Probably somewhere in between the messages sent by Smithfield, McDonalds, and the Humane Society. But in the meantime, McRib season is ticking away. It's hard enough to eat one, what with the guilt and spiking blood pressure. Having to worry about getting splattered with barbecue sauce by enraged animal rights activists is just too much.

Good thing we found some ways to disguise the McRib.

Reed Rothchild devised the perfect disguise - the Mac Rib! Take two McRibs, ditch the buns, cut the meat in half, add extra barbecue sauce to act as an adhesive. Stack the rib-ish meat into a Big Mac with a few layers of fries. 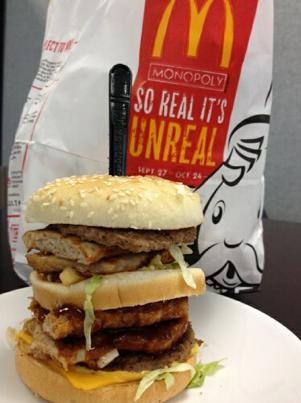 While Rothchild reports passing out twice - once in his office, and Elvis-style on the toilet - at least he avoided the ire of animal rights activists.

Got a crowd in need of McRibs? Or do you just want to get as much bloody-lipped, insane pork as possible? It's the McRib party sub! The folks at Foodbeast throw their own private pork party.