We love pumpkins! We just want to carve 'em, roast their seeds and then bake the guts into all kinds of awesome. So, this autumn, we're on a quest for the tastiest local pumpkin goodies, before the fleeting flavor is gone. Do you have a favorite local seasonal pumpkin food? E-mail tips@riverfronttimes.com. Check out our other fall and Thanksgiving coverage over at Gobble Gobble. 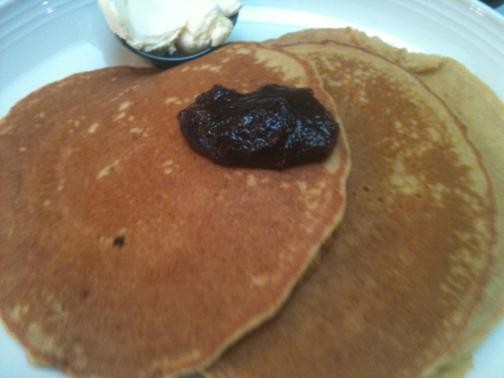 If anyone's going to know how to cook a pumpkin, it's the place that grows a bunch of them. Eckert's Country Restaurant (951 S. Green Mount Rd., Belleville, IL, 618-233-0513) has it figured out. Their current autumn menu has pumpkins galore, but they really shine in the pumpkin pancakes.

Eckert's doesn't equate "pumpkin" with "overpowering doses of cinnamon, cloves, and nutmeg". These pancakes are light on the spice, using just enough of the classic pie seasonings to highlight the earthy sweetness of pumpkin. They're more hearty than cloyingly sweet. It's a natural pumpkin flavor, a welcome reprieve from the glut of syrups and flavorings.

The pumpkin gives the pancakes a bit of heft, but they still retain a light fluffiness. It's enough oomph to make the pancakes more filling and satisfying than their plain counterparts.

To really capture the flavor of autumn, ask for a cup of Eckert's apple butter. Topped with apple butter and a smidge of maple syrup, this stack embodies the real taste of autumn without all the contrived, fake flavors that have become all too ubiquitous.