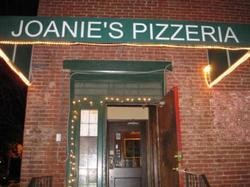 - Gut Check reported in September that ​Joanie's Pizzeria (2101 Menard Street; 314-865-1994) planned to open a new location at 5441 Telegraph Road in the Oakville area of south St. Louis County. That location is now open, according to Joanie's Facebook page.
When we spoke to owner Joanie Smith in September, she told us to expect a "smaller version" of the original at first, with expanded seating possible by the spring.
- Wasabi Sushi Bar will open its sixth area location and seventh overall at 6530 North Illinois Street in Fairview Heights, Illinois, on Tuesday, November 22. The restaurant's regular hours will be 11 a.m.-9 p.m. Sunday through Thursday and 11 a.m.-10 p.m. Friday and Saturday.
The new Wasabi follows the original on Washington Avenue as well as outposts in Clayton, Warson Woods, Town & Country and Edwardsville, Illinois. There is also a Wasabi in Lakewood, Colorado.