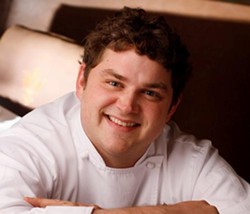 Kelly English Steakhouse will have its grand opening at 11 a.m. today inside Harrah's Casino (777 Casino Center Drive, Maryland Heights; 314-770-8100).
Kelly English is the owner and chef of Restaurant Iris in Memphis, Tennessee, and in 2009 he was named a "Best New Chef" by Food & Wine magazine.
I had a chance to speak with English in July of this year, and in the course of our conversation he described his culinary philosophy:

The menu at Restaurant Iris blends English's Louisiana background with the contemporary interest in local, sustainable produce and a sense of playfulness. While English concedes that his restaurants will always reflect his personality, he says, "The real purpose is to play to the diners. There's nothing I won't do for a guest. We're going to go and give people the best experience we can."

As for his new restaurant's relationship with St. Louis:

As for splitting time between Memphis and his new project, English foresees being in St. Louis "as much as my car will allow me."

"We're going to get to know the farmers in the area," he says, adding that one of his purveyors at Restaurant Iris is Newman Farm, which raises heritage-breed pork in Myrtle, Missouri. "We're going to take as much as the soil can give us."

Stay tuned to Gut Check for a much closer "First Look" at Kelly English Steakhouse in the coming weeks.