Post of the Month: The Five Best New Restaurants in St. Louis

October 31, 2011 at 5:00 PM
comment
Gut Check is constantly working to bring the latest food news to our readers. As a result, we do a lot of blogging. In an effort to draw attention to great posts that may have otherwise been lost in the blogosphere (and to recognize our hard-working writers), we present Post of the Month.

The state of the economy remains iffy, at best, but over the past year some ambition and risk have sneaked back into the St. Louis restaurant scene. That made choosing the five best new spots (not to mention the best, period) especially difficult -- so much so that I've included five "honorable mentions" along with this top five.

First, a word about what we consider "new": We based this list on the restaurants reviewed in the twelve months prior to the release of the Best of St. Louis 2011 issue, October 6, 2010, to September 22 of this year. Add the two months (at least) between a restaurant's opening and when I consider it fair game, and, yes, some of these restaurants have been open for a while.

Also, not every restaurant reviewed over the past year was new when I wrote about it, so those weren't considered for this list. Finally, to forestall an inevitable question -- and to bait some of our favorite commenters -- I decided to view Taste as a relocated rather than a new restaurant. Otherwise, it would have made this list.

5. Mad Tomato
The new restaurant from Vito Racanelli Jr. (the late Big V's Burger Joint, Onesto Pizza & Trattoria) strikes a balance between higher-end dining and its owner's irrepressible energy. In other words, the food is great, but the space can get loud. The cuisine is rustic Italian, best exemplified by the "Hunter's Egg," an egg poached in a tomato broth and served over polenta. It's deceptively simple and incredibly flavorful -- a description that you might find yourself using often at this Clayton spot. 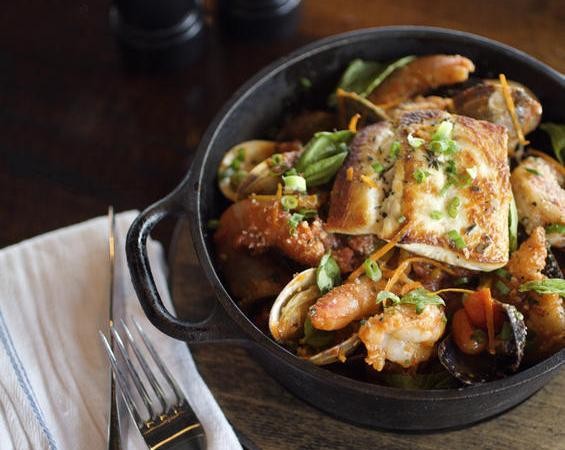 4. The Tavern Kitchen & Bar
The Tavern Kitchen & Bar has done the unlikely: It has given Valley Park an aura of culinary cool. In the sleek open kitchen, chef Justin Haifley and his crew turn out contemporary takes on classic American dishes, from meatloaf to bacon & eggs, steak to fisherman's stew. The housemade pasta dishes are terrific, and the Tater Tot casserole might cause you to rethink the humble fried spud. (Unless, like us, you've loved Tots all along.)

3. Home Wine Kitchen
Home Wine Kitchen, from chef Cassy Vires and her husband Josh Renbarger, takes a bold stand in a town where reliable old favorites -- both restaurants and specific dishes -- reign supreme. Here the dinner menu changes every week. Yes, this is a nod to local, seasonal produce, those inescapable buzzwords, but it also speaks to Vires' confidence in her skills. Her confidence is well-placed. Without any idea what you might be eating, you can make a reservation here knowing a fine meal awaits.

2. Bogart's Smokehouse
The second-best moment at any St. Louis restaurant right now is when Skip Steele (or one of his crew) fires up his propane torch to caramelize the apricot glaze on the baby-back ribs at Bogart's Smokehouse. The best moment is when you take your first bite of those ribs, or the prime rib, or the pastrami, or, really, any of the barbecue served up at this Soulard gem. Yes, local 'cue hounds knew before Bogart's opened that Steele was a master. Still, it's always remarkable when a new restaurant immediately feels as essential as Bogart's does.

1. Salt
At a time when so many restaurateurs are playing it safe, chef Wes Johnson decided to go big and bold, taking over a very large space and filling it with his unique idea of what a modern Midwestern restaurant could be. Yes, Salt is rustic and ingredient-driven, in the contemporary style, but it is also playful and just as driven by Johnson's creativity and ambition. Or, to quote a friend of mine after I'd extolled the dishes here, "You had me at duck-fat-fried chicken." Salt is the Best New Restaurant of the past twelve months.