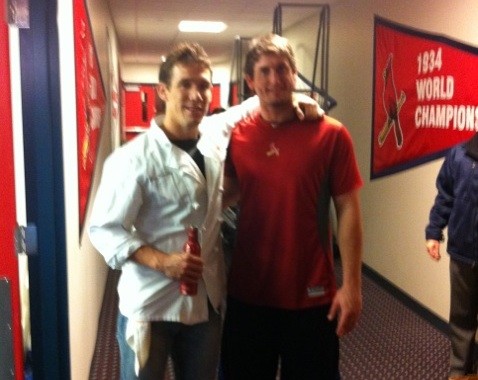 The cook from Farmhaus hadn't expected to make it into the clubhouse of the World Series champion St. Louis Cardinals last night, let alone come face to face with hometown hero and series MVP David Freese. So when he asked Freese for an autograph, the cook reached for the only piece of paper he had on hand: his paycheck.
Let's back up: How did chef and owner Kevin Willmann -- he of Food & Wine magazine's "Best New Chefs" Class of 2011 -- and three of his Farmhaus cohorts find themselves in the bowels of Busch Stadium in the aftermath of one of the greatest nights in St. Louis sports history?
"It was all chef's idea," says Eric Scholle, Farmhaus' jack-of-all-trades (and recipient of RFT's "Best Service in a Restaurant" in 2011). 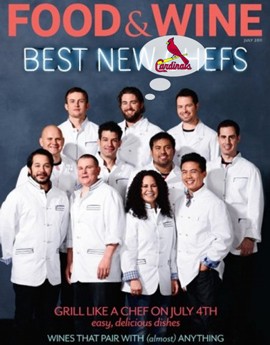 Willmann, a huge Cardinals fan, and his Farmhaus staff watched the Redbirds close out the Texas Rangers on a TV in the restaurant's kitchen.
"We were all jacked up," Scholle says.
As Scholle was tending to front-of-house business at the bar, Willmann came up to him and said, "We're going to try to get in."
The plan wasn't entirely far-fetched. Once they reached the stadium, Scholle explains: "We kind of knew enough [already] to say the right things."
Scholle, Willmann and two cooks threw on their kitchen whites and loaded up three sheet trays with individually wrapped portions of the restaurant's signature meatloaf. They fought traffic to get as close as they could to the stadium -- not as close as they would have liked, of course, since they had to carry all that meatloaf -- and hoofed it to a gate, where they told the attendant that they were "there to bring reinforcements."
"We looked really official," says Scholle. "We get in there, we walked very fast, we asked 'Which way to clubhouse.'"
Once they made it to the clubhouse, they found the array of steam tables amidst the postgame spread and got to work dishing up the meatloaf. Scholle says he recognized a few players milling about the throng of team officials and family, including Arthur Rhodes and Jaime Garcia.
Then, Scholle says, laughing incredulously, "Matt Holliday walks up and says, 'What do we have going on here?"
The Farmhaus staff plated meatloaf for the outfielder -- no, wiseasses, he didn't drop the plate -- and his wife.
"Then, more or less, they kind of realized we weren't supposed to be there. We're sitting there in the kitchen, [and they say,] 'Yeah, Farmhaus, we dont know how you got in there, but it's time to go.'"
But the Farmhaus crew's night with the Cardinals wasn't over yet. "On the way out," Scholle says, "I saw David Freese walk out of the training room."
The new Mr. October graciously posed for photos and signed a paycheck.
"We hooted and hollered," Scholle says of the ride back. "We couldn't believe it."