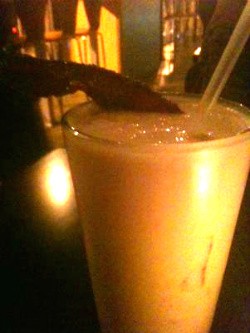 After an extended soft opening, Bailey's Range (920 Olive Street; 314-241-8121) is officially open for business, and we've already picked our favorite item from its boozy milkshake and floats menu.

Despite its name, the Sweet, Sweet Bacon Shake isn't too sweet. Sure, it packs a sugar wallop, but there are plenty of other flavors to make this a sophisticated, decadent shake that demonstrates why its ingredients have become ubiquitous trends.

The shake begins with the restaurant's housemade salted caramel ice cream. Ever get something touted as being "salted' caramel that just tastes like caramel? That's not the case with this shake. The caramel's sugar is tempered with a bright saltiness that intensifies the depth of the caramel.

This isn't a brain-shatteringly thick shake. Which is good. It's cut with enough milk to make it sippable. The hearty dose of Maker's Mark bourbon doesn't hurt, either. It's a bold amount of bourbon that kicks at the end of the sip -- sharp, sweet and smoky. Despite the trendiness of the flavors, it hearkens back to the traditional bourbon milk punch.

But then, there's bacon.

At first glance, it seems the bacon comes in the form of a thick, candied strip of bacon used as a garnish, standing out of the shake. This is some strong bacon: thick and meaty, heavy on the smoke and seasonings, but with a hard caramelized glaze that keeps it crunchy, even when it's submerged in the shake.

But that's not all. A few sips into the shake, the straw clogs. Not with a hard glob of ice cream, though. It's blocked by one of many big chunks of the candied bacon mixed into the shake. There's no crumbly bacon dust; these are substantial bites of sweet meat that retain their crispiness throughout the shake.

"Hold on -- I have to scoop the rest of the bacon out of my shake," said one sampler, followed with, "Someone's going to Hell for inventing this."

It would be so easy to just dump some rail bourbon into caramel ice cream, throw in some bacon and call it the Sweet, Sweet Bacon Shake. And it would probably sell. Bailey's Range has gone above and beyond, perfecting each component to create a bold, intricate cocktail that just happens to be a milkshake.