Here's a joke: What's the difference between dogs and cancer? People actually want to talk about dogs.

That's an original, by the way, not one culled from 50/50, the recently released Seth Rogen and Joseph Gordon-Levitt dramedy (brocom?) about cancer. The storyline wasn't much of a stretch for writer Will Reiser, who was diagnosed with spinal cancer when he was in his twenties. In the film Rogen plays his best bro ― also not a far stretch from real life.

The movie's title, 50/50, is a reference to the odds of Adam's (Gordon-Levitt) chance of surviving neurofibrosarcoma. "The more syllables, the worse it is," opines a fellow cancer patient. Glioblastoma, squamous cell carcinoma, neurofibrosarcoma: Awful strings of vowels and consonants, all.

To help Adam deal with this newfound tangle of letters and life, his girlfriend, Katherine, gifts him with Skeletor, a retired racing greyhound, who she says will be good therapy. (Like the Olsen twins and a lot of other actors in Hollywood, the greyhound is played by two littermates, William and Denver. And speaking of letters, they're actually AKC dogs -- show dogs -- not former racers. Which are awesome.) The producers said they picked a greyhound because the dogs are weird, awkward bags of bones who look how a cancer patient might feel. They can both wear out quickly and, on some days, prefer to stay on the couch. But, in Dinner and a Movie's experience, only one is likely to eat its own poop after a hearty romp in the back yard. 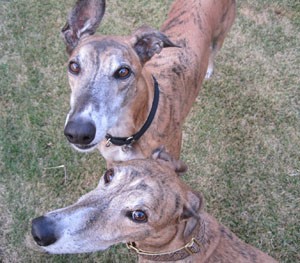 Almost immediately after his diagnosis, Adam is ambushed by well-intentioned doctors and therapists who assure him that everything he's going through is normal, in effect shoehorning his ugly, amorphous blob of a disease into tidy textbook definitions. For Adam -- and the audience -- this is irritating at best. Because so, too, does 50/50 shoehorn its cast into predictable roles: The overbearing mother. The girlfriend who can't handle it all. Therapist-as-love-interest. Best-friend-as-wingman.

But the film also gets plenty of details (heartbreakingly) right on the money. The hospital hallways, for one, are brightly painted, as if trying to mask their inherent cheerlessness: "Families facing cancer together!" one mural beams. Also represented in 50/50 are the people who, in a crisis, flake just as sure as paint, as well as sprinklings of small, sustaining, unexpected joys.

At Half & Half the walls are white. The place is clean without being sterile and warm without trying too hard. It exudes the easy elegance of a room decked out by, say, Pottery Barn. Consider the steak & eggs: Wedges of potatoes are hidden beneath oblong cuts of hanger steak -- which could easily star unadorned and on their own -- cooked to a rosy medium-rare, and a tangle of tobacco onions top it all off. The eggs are the sunniest things on that block of Clayton, the sourdough's golden and the hollandaise could be taken intravenously. Likewise, the grilled-salmon BLT seems almost too rich to reside on a lunch menu, but the avalanche of housemade chips and the brioche bun bring it down just this side of dinnertime (making this, more accurately, Late Lunch and a Movie, as Half & Half closes every day at 2:30 p.m.).

This spot has rightly earned plenty of praise since it opened in late spring, and Late Lunch and a Movie has few criticisms (save a flat soda). We predict that the odds of Half & Half enjoying a long life are significantly higher than 50/50.

Would that it were always so.