#53: Biscuits and Wild Mushroom Gravy at Blood and Sand 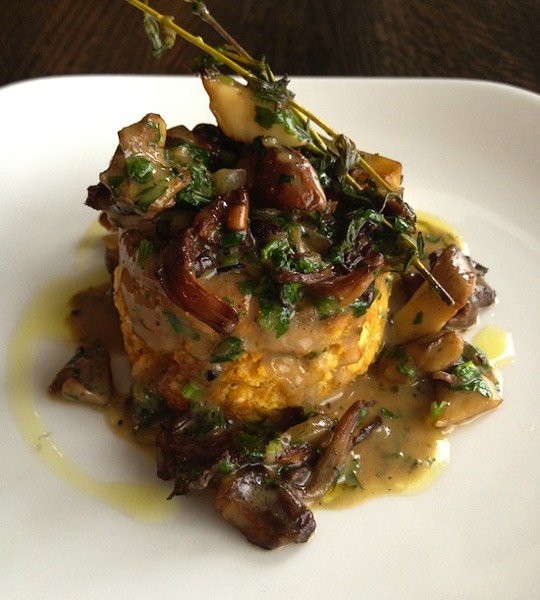 When we first heard about the members-only concept at Blood and Sand (1500 St. Charles Sreet; 314-241-7263), we were a bit skeptical, particularly considering the current economic climate. Sure, big ballers wouldn't have to sweat a $15 monthly fee, but what about the rest of us schmoes? And what could Blood and Sand offer to justify monthly dues?

The answer's simple: exceptional service, cocktails, atmosphere and food. And it all starts with the Biscuits and Wild Mushroom Gravy.

Chef Chris Bork was nice enough to send us the recipe, revealing the simplicity and inventiveness in this dish. The sweet-potato biscuits are a sturdy platform for the mushroom gravy. He uses thyme, garlic and sallots to create an herbaceous complement to the earthy mushrooms. The mushrooms will change based on the season (as do the other vegetables, reflecting Blood and Sand's philosophy), but on this visit we were served chanterelles, oyster and French horn mushrooms. There's butter, too, of course, giving the gravy a hint of comforting decadence that makes us want this for brunch every single weekend. (Note: As of now, Blood and Sand isn't serving brunch, but we won't refuse a fantastic brinner.)