Now at Wash. U.: A Butter Churning Club?

One night last spring, three dorm-mates at Washington University had one of those ideas that seems absolutely brilliant if you've been up very late studying: Why not start a butter-churning club?

Not that Zach Kaufman, Sean Wang and Jeremy Winer grew up on dairy farms or anything. Kaufman had churned once, on a grade-school field trip, and, in third grade, had read the entire Little House series, although he says he did not enjoy it. ("But you enjoyed the butter portions," Wang suggests helpfully.) But the idea charmed them. They started watching YouTube videos to find out how, exactly, churning was done. They told their friends about it. They started a Facebook group that has, so far, attracted more than 60 members.

Eventually, the time came to put up or shut up. Would there be a butter-churning club or not?

And so they put together a funding proposal, complete with PowerPoint, and presented it last week to the Wash. U. Student Union. "They liked us a lot," says Winer. So much that the Union voted unanimously to allot the group, now called WUChurn, $467.

The three founders purchased supplies at Schnucks: a pint of heavy cream and several Mason jars to serve as temporary churns until they get around to purchasing a more traditional crock-and-dash churn. (As they had learned from their research, you can churn butter simply by shaking up a Mason jar filled with cream, though it's not nearly as picturesque.)

Last Friday, the great moment arrived: For the first time, they churned.

They were so pleased with themselves, they gathered on Saturday afternoon in the Danforth University Center to do it again.

The first and most obvious question: Why do students at Wash. U., which offers no classes in agricultural studies (though it does have a community garden, the Burning Kumquat), need a butter-churning club?

"It's a unique experience on campus," Kaufman explains earnestly as Winer pours cream into three Mason jars. "It's a way to create local, organic dairy products and support the humane treatment of animals. It's healthier."

"And there's no butter on campus," Kaufman continues.

"We've been talking to the dining staff," says Wang. "They have to use spray stuff. There's no margarine, either."

"They may have some at brunch on Sundays," Winer interjects.

The three pick up their Mason jars and begin to shake them vigorously.

The group's biggest expense will be the churn. On EBay, they go for between $60 and $160. ("We expect it to last 100 years," Wang asserts.) They also plan to buy a strainer and a spoon to wash the butter, as well as Tupperware containers for storage. The executive board is currently looking for a dairy where they can buy cream, so they don't have to rely on Schuncks. And maybe one day, they'll get a custom Wash. U. butter mold.

"In the spring we're planning to have a butter-carving competition," says Kaufman. "And maybe we'll expand into ice cream and cheeses." They're not sure if they'll continue to use antiquated equipment, though, or if they'll concentrate on dairy. 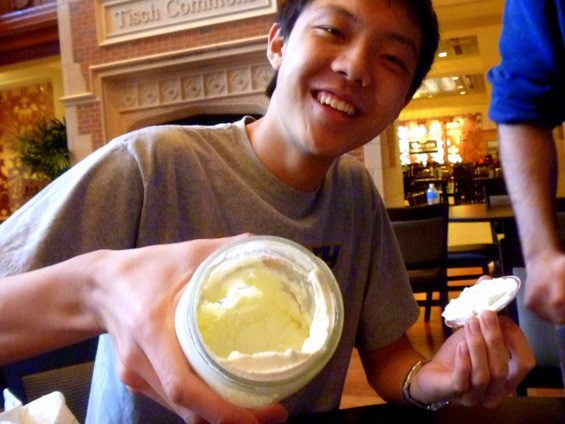 "It's an easy break," Wang says, opening his jar to check the progress of his butter. It currently looks like whipped cream. "It's so intense here. Food is like an afterthought. This is easy and repetitive."

"It makes a cool noise," says Winer, holding his Mason jar up to his ear. "It's a stress-reliever."

"A productive stress ball," Kaufman agrees. "We're going to siphon off the buttermilk into a pancake committee."

Although all three are majoring in the sciences (Kaufman in biomedical engineering, Wang in econ and physics and Winer in philosophy, neuroscience and psychology), they haven't thought much about the scientific principles involved in turning cream into butter.

"Maybe we can quantify the amount of time it takes to make a certain amount of butter," Wang muses.

"Or strap a pedometer to the wrist to measure how many calories you burn," Kaufman adds.

With the butter nearing completion, Winer is dispatched to the cafeteria line to scavenge for rolls. He returns triumphant with a few slices of white bread. "They gave it to me for free!"

Each of the WUChurn members takes up a plastic knife and begins to spread butter on a slice of bread. Kaufman and Winer's butter is light; Wang's is thicker and doesn't spread as easily.

"We should have a spreading class," Kaufman observes.

"I like my clumpy butter!" Wang says defensively. He takes a bite. "This actually tastes really good. I can't believe it's butter!"

Winer eyes the three Mason jars while he eats his bread and butter. "We have so much butter right now."

"We should save it for the next meeting," says Kaufman. "Let's get sample cups on the way out." This evening the six members of the executive board plan to schedule the first general meeting and delegate club duties, such as cleaning the churn.

Winer has started shaking his Mason jar again. "My butter is starting to look clumpy like yours," he informs Wang.

Though WUChurn's funding doesn't officially kick in till second semester, the group is already planning for the holidays.

"Butter makes a great Christmas gift!" Kaufman declares as he wipes excess butter off the table with a paper napkin.

As the three leave the building, they continue to stare in awe at their Mason jars.

"We made butter!" Winer exclaims.

Wang giggles. "This is so rewarding!"

WUChurn is open to the general public. If you know of a local dairy that can provide cream, please contact the group at wuchurn@su.wustl.edu.

Education In the Kitchen