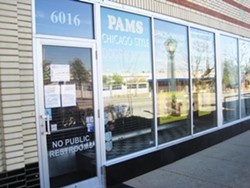 Pam's Chicago Style Dogs & More (6016 Delmar Boulevard; 314-721-7267) will be closed until at least Wednesday, October 26, after Ameren UE apparently turned off its power due to an unpaid bill.

"We do apologize, but due to an Ameren UE issue, mostly with our bill, we are temporarily closed," reports the recorded message on Pam's phone line.

On Wednesday, October 19, Pam's posted the following on its Facebook page:


We know that this Ameren issue has gone on longer then we had hoped. Every solution we thought we had has turned up empty. We have not given up on raising the $3000.00 we need to get back up but for now we will have to continue to be closed.We are trying everything we can and will continue to try. We miss you very much.

More as I learn it.