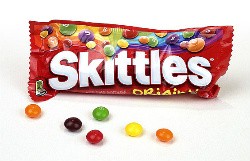 It wasn't all that long ago that Gut Check was donning our finest Disney princess Star Wars character drag outfit and joining the swarms of greedy American children on the hallowed Halloween quest for candy. So we remember well the post-trick-or-treat ritual of sorting the bounty into two piles, i.e., Good Stuff and Crap.

Then we'd head back out and t.p. all the houses where we'd been handed lame candy. We considered the act to be a hint to the clueless to maybe bust out the Snickers next year instead of those execrable homemade popcorn balls. A community service, if you will.

Now we're on the other side of the door, trick-or-treatily speaking, and we're also working from a position of strength when it comes to stamping out Halloween-candy imbecility.

Taste the rainbow, indeed! Skittles are for sour, fruity fans what M&Ms are to chocolate fiends.

Crispy shells, chewy innards, and a blast of the best fake fruit flavors available on the candy market. And not just with all the new Skittles blends that have been introduced in recent years - Blenders (two Skittles flavors in one Skittle!), Fizzl'd Fruits (Skittles covered in Pop Rocks dust!) and Sour. Even the ordinary red bag of Skittles has something for everyone. Gut Check's a fan of orange Skittles, because they they taste like baby aspirin. Don't like baby aspirin? No problem! Just move a step across the rainbow. There's a flavor for everyone!

Did you know purple Skittles are grape in the U.S., and black currant-flavored in the U.K.? Such versatility and worldliness.

Our feelings about candy corn are on par with Moose A. Moose, the animated, um, moose who entertains the tots between shows on Nick Jr.

Mr. Moose does not like candy corn, and neither does the family who created this most spectacular homage to candy hate with the help of Moose's Halloween song, "I Don't Like Candy Corn":

What's to hate? Candy corn is one step above wax fangs on the Halloween candy flavor chart. It's nothing but corn syrup mixed with three other kinds of sugar, some wax, food coloring and mineral oil.

You know that mineral oil is a laxative, right? Candy corn is shit-inducing sugar. Also, it's a big liar.

Check out the rest of our Best and Worst Halloween Candy Countdown.