Tidbits from Tony's and Vino Nadoz 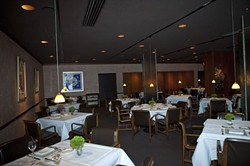 - The venerable Jerry Berger was the first to report that St. Louis institution Tony's (410 Market Street; 314-231-7007) has put aside a possible relocation to the renovated Cheshire Inn and is now pondering a move to the former Busch's Grove location at 9160 Clayton Road in Ladue.

- Meanwhile, Joe Bonwich of the Post-Dispatch, reacting to the news about Tony's, notes that the Bommaritos' interest in the space means that Frank and Carmelo Gabriele of Il Bel Lago (11631 Olive Boulevard, Creve Coeur; 314-994-1080), will not be taking over the Busch's Grove Space, as previously announced.

- Finally, as I mentioned in my post on the Five Best Restaurants to Die in St. Louis in the Past 12 Months, Vino Nadoz (16 The Boulevard, Richmond Heights; 314-726-0400) has announced Amy Zupanci, the former owner and chef of Fond in Edwardsville, Illinois, as its new head chef.