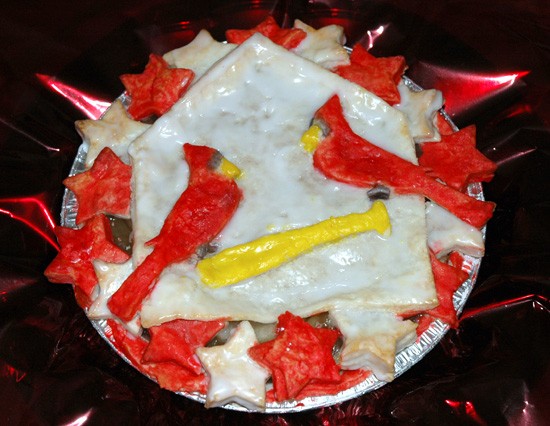 People call Brian Runge the cheesemonger. When a friend sent him nearly 100 pounds of dehydrated morel mushrooms, he decided to get creative by incorporating them into a cheese spread that became so popular at Alton Farmers' Market that it sold out on multiple occasions before it could even be unpacked from his vehicle. Since June 2010, he's played with flavors, concocting colorful painted pies, unique pizzas with artisan crusts, a variety of cheese spreads and more for his company, River City Savories.

Serving as the company's creative consultant, Runge has created 35 varieties of cheese spreads ($7) including bacon scallop, spinach artichoke and cran-pear chutney for the likes of steaks, burgers, baked potatoes, crackers or bread. Each spread starts with a cream-cheese base and is supplemented with other cheeses such as havarti and mozzarella, a variety of spices and a layer of the designated flavor's ingredients. Take, for instance, Runge's Greek cheese spread.

"Greek cheese [spread] has feta, artichoke hearts, onion, black olive and red bell peppers in it. It tastes like a Greek salad," says Runge. "Some people buy it, cut it into pieces and serve it on romaine lettuce."

The River City Savories product line also includes hand-churned morel butter and bits from Runge's culinary past as the owner of Pie Town Stompin' Grounds Restaurant, once sampled by Alton Brown on the Food Network's Feasting on Waves: plain cheesecakes ($14), flavored cheesecakes ($18), pies ($12) and painted pies ($18). Artisan pizzas, the latest addition to the menu, create a backdrop for his savory cheese spreads.

The grilled, thin-crust, nine-inch pizzas ($8) are topped with Runge's cheese spreads and additional toppings, utilizing ingredients from farmers' markets whenever possible. The flavors range from peach and prosciutto with barbecue sauce to a simpler sweet, spicy red sauce on a blackberry-infused sweet pizza crust.

"We have a pizza called 'Fire Island.' The pizza dough includes dehydrated peppers made into a powder. Smoked jalapeno cheese tops the crust along with several hot peppers, Granny Smith apples and chicken," says Runge, showcasing the creativity in his recipes. "I like experimenting with different flavors and seeing how much I can push the limit."

River City Savories' products are offered seasonally at Alton Farmers' Market and craft fairs, as well as at Sinclair's Market in Jerseyville, Illinois, and through special order on the River City Savories website. Runge, along with his sister, Lisa Johnson, the company's owner, would love to open their own storefront and eventually break into the St. Louis market.