Just Think of Them as Land Shrimp: Bugs on the Table 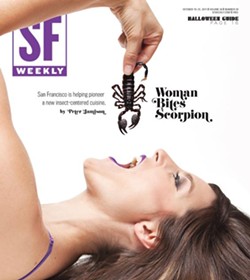 This week's feature story in our sister paper SF Weekly takes a look at entomophagy. No, that's not the legal term for an unspeakably lewd act. Entomophagy is the practice of eating insects, a food staple in some cultures. As author Peter Jamison discovers, a few dedicated bug-chompers want more Americans to give insects a try.


By contrast, Martin cooks her wax worms slow and low in butter. The larvae and mushrooms blend to a virtually indistinguishable texture, color and taste, soft and golden, their woody and earthy notes offset by the cream's silky tang.

Proponents argue that insects provide a much more efficient and environmentally friendly source of protein than our traditional meats. There remain questions, though, about the practicality of an insect-based diet as well as the health risk. Definitely worth a read.

If you'd rather skip right to the gross, Fear Factor-esque side of entomophagy, Gawker today posted a video of a man eating a live scorpion. Fair warning: It's pretty damn disturbing -- and, thus, posted after the jump.