Chicken Adobo with a One-Hour Egg From Guerrilla Streetfood 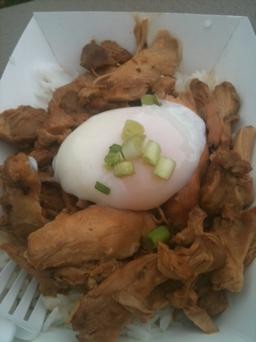 In the twilight of 2011, it's time to see if the year's biggest local food trend -- food trucks -- are going to maintain their steam. What's it going to take? Good food, reasonable prices and varied locations that bring food to far-flung areas instead of clustering with the other food trucks.

Guerrilla Streetfood has the latter covered. The day we caught it for lunch, it had ventured where few food trucks go: south of Highway 40 to Chouteau and Ninth Street, to the delight of Nestle Purina employees.

The reasonable prices are there. The most expensive item is a giant pork asado wrap for $8. Never mind that it's the only source of Filipino food in St. Louis, aside from Nipa Hut.

We ordered the chicken adobo -- chicken that's been braised in soy sauce, vinegar and spices until it's fork tender. It's a giant pile of meat, served on a modest bed of white rice and, if you want, topped with a one-hour egg.

The egg is not strictly Filipino; it's simply an egg that's been poached in an immersion circulator for an hour at 144.4 degrees. No matter, because it's an excellent addition. Somewhere between runny and firm, the egg mashes into the sauce and gives it richness and body.

The slow-cooked chicken nearly melts in the mouth, it's so tender. It's infused with the fermented saltiness of the soy sauce and a slightly acidic tang from the vinegar. The flavor is neither overpowering nor particularly bold; it lies on the dark end of the spectrum, earthy and deep. Enough braising liquid seeped through the chicken to flavor the rice, creating a balanced and unique one-dish lunch that's served fast without sacrificing quality.