Be Nice to Your Service Person or Suffer the Consequences 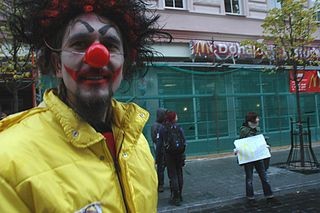 Yesterday Gut Check discussed why you shouldn't be an asshole to staff members in restaurants, taking the stance that the No. 1 reason to act decent is because there's a human being on the receiving end of the crazy blind rage.

Today, we have reason No. 2 to not be an asshole to restaurant staff members: that staff member possibly served ten years in prison for manslaughter and is a hair away from losing his fucking violent mind when you hassle him during his shift at McDonald's.

That's what happened in a New York City McDonald's last Thursday night. Two women, Denise Darbeau and Rachel Edwards, got angry when employee Rayon McIntosh informed them he had to scan their $50 bill to verify it. The women got an attitude about the routine procedure, so McIntosh beat the shit out of them with a metal rod.

That's right. Beat them with a metal rod, leaving Darbeau, who started the physical confrontation by slapping McIntosh, with a fractured skull and broken arm. Edwards suffered a big cut.

McIntosh is charged with felony assault charges, along with criminal possession of a weapon, while Darbeau and Edwards are charged with menacing, trespass and disorderly conduct.

We don't condone McIntosh's response in the least. No one should be beaten with a pipe. Ever. However, this is what can happen when customers are rude to the wrong service person. If you don't want to be nice in the name of being a decent human being, at least do it so you don't get your skull cracked.

Of course, someone captured the whole incident on video.