How Not to Complain When Your Favorite Restaurant Changes 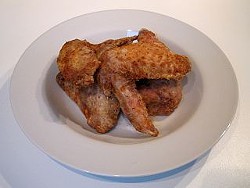 Change happens. Especially in the restaurant industry, where many new ventures close or change their focus in their first years. Some people are ill-equipped to deal with change -- so much so that perhaps they should reconsider dining out altogether.

Case in point: A local restaurant that shall remain nameless recently underwent a change in management and kitchen staff. After several years of trying to compete with nearby establishments that had similar menus, the owner of this establishment realized that he had two choices: revamp or close. He chose the former, enlisting a manager and chef with extensive restaurant backgrounds to reinvent his business.

Of course, not everyone was happy with this.

The manager, who also shall remain anonymous, related a story to Gut Check about a particular patron who was so displeased by the change in the menu -- particularly the lack of hot wings -- that he informed her not only that the restaurant wouldn't be a success, but that the manager, as a human being, would also never succeed.

All because this place quit selling bar food, despite the presence of roughly 30 restaurants in the same neighborhood that sell bar food (and some quite tasty wings).

At Mind Your Fucking Manners, we've been equally critical of faux pas by customers and restaurant staff members alike. In this case, though, we're going to give the manager a pass for telling the customer that he will never be satisfied. Had the customer just said that the restaurant wouldn't be a success, that's one thing.

But by getting personal? Sometimes, the gloves have to come off.

Restaurants do appreciate honest, constructive feedback. We have yet to encounter a restaurateur, manager or chef with a successful business who didn't care what customers thought. The successful ones also know that their restaurants can't be everything to everyone. Sometimes, there's no answer but for a customer to take his business elsewhere. Ah, the beauty of the free market.

However, that doesn't give the customer the right to wage a personal attack on any staff member of the restaurant. Whether it's telling a person that they're bound to be a failure because you don't like a new menu, or stiffing a bartender and telling her she should lose weight.

Got a legitimate complaint about the food, the service, the atmosphere? Say so. But do it with a modicum of human decency. Just because you don't like something doesn't give you the right to be cruel to the person who brought you what you ordered. It's basic pre-school etiquette that seems to have been forgotten by people under the impression that everything should always go their way, and others are responsible for their happiness.