Today begins a two-day commemoration of World Food Day at the Donald Danforth Plant Science Center (925 North Warson Road, Olivette; 314-587-1000). Volunteers around St. Louis will prepare food packages to be sent to a children's center in Tanga, Tanzania, to alleviate some of the hunger problems in the region.

"It's really to create awareness in our community and to involve the community with these larger-scale issues that don't really touch us in particular, but are very common in the world," says assistant director of development Karina Benabe.

"Also, it's to bring people in to help out with this cause and have them learn more about how you can be a part of the solution, whether it's short term or long term." 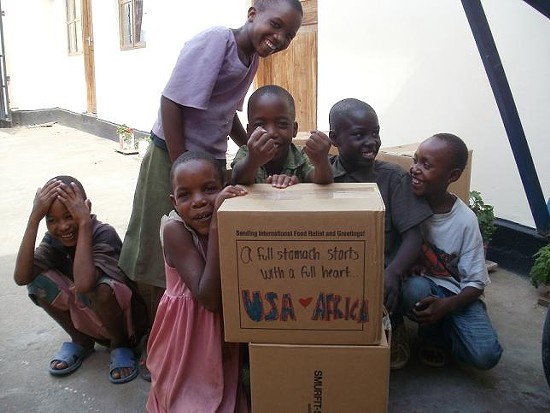 The event will run in one-hour sessions from 9 a.m.-6 p.m. today, October 14, and from 9 a.m.-4 p.m. Saturday, October 15. Volunteers will spend one hour packaging meals of rice, soy protein, dried vegetables and a vitamin packet, and approximately one hour in the Danforth Center's "Science Highlights" program, a guided tour through different stations teaching about plant science.

"The Science Highlights are going to be very surprising and very interactive for all ages," public relations manager Melanie Bernds says. "It's going to represent plant science and how it connects to hunger, and what that means to St. Louis."

This is the second year the Danforth Center is participating in World Food Day. Last year, the event brought in about 1,900 volunteers. This year the goal is 3,000 volunteers creating 500,000 food packages.

Hannah Hightower, an eighteen-year-old senior at Visitation Academy, is on the Junior Board at the Danforth Center and volunteered at the event last year. Hightower also traveled to Tanzania to help distribute the food packages to children last February. She says providing one solid meal for the children of Tanga really perked the children up and made them stronger.

"I can't even describe it, it was so moving," Hightower relates. "I sat down with them while they were eating. I don't know much Swahili, but I was trying to use the guidebook to ask the kids how they like the meal -- they all loved it."

Hightower adds that for many of the children in Tanga, the food packages made at the Danforth Center are the children's "only constant."

"Aside from being a learning experience and about science, there's that alarming statistic that a child dies every six seconds from malnutrition," Bernds notes. "We see it on the news, we hear about food prices going up. We want people to think globally about world hunger. It's not going to go away unless we start taking notice and move that meter along to not only feed the world but find solutions."

Benabe says that the event is a feel-good, hands-on experience that many people in St. Louis will enjoy.

"I feel like most, if not all, people that come in will leave with a sense that they did something great and learned a lot about what's going on and what's being done to address all these issues," Benabe said. "Just leaving that much more aware about what's happening around us and around the world. That's really one of the biggest goals of this event."

The Danforth Plant Science Center is trying to engage the St. Louis community as much as possible. The soy protein in the food packages is from St. Louis company Solae, and the rice comes from Missouri farms. The Center will also be holding a food drive to benefit the Harvey Kornbluth Jewish Food Pantry.

The World Food Day commemoration is a pre-registered event. A $10 donation for students and educators and $20 for adults is requested to help cover material costs and international shipping. Tickets can be purchased here.