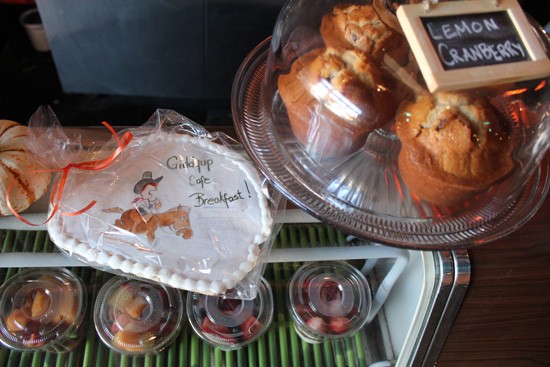 Many a cowpoke has chosen to chase the day away with Tex-Mex grub and a drink (or three) at the Atomic Cowboy (4140 Manchester Avenue; 314-775-0775). Now, the popular watering hole in the Grove is introducing Giddy Up Breakfast Bar, where patrons can mosey on over and wrangle up early-morning eats five times a week.

Owners Jim Kellogg and Chip Schloss included an espresso bar in the Atomic Cowboy's set-up when it moved from Maplewood to the Grove's lively strip over five years ago, intending to sell coffee to early birds. But it wasn't until they met Kate Morrissey that they decided to bring mocha and more back to the restaurant's daily grind.

Morrissey, a St. Louis native and pastry-arts student who once started her own baking company to sell sweet treats at the Downtown Farmers' Market, applied to wait tables at the Atomic Cowboy but instead now serves as the breakfast café's executive chef and sole employee of its day-to-day operations.

She explains that Giddy Up aims to be "a small place with great coffee, delicious food and friendly service" with plenty of "hot, flaky, buttery breakfast goodness" to go around. The small but substantial menu includes three different grilled breakfast burritos, parfaits and Pratzel's bagels as well as such freshly baked goods as stuffed croissants, muffins and seasonal doughnuts. Everything is priced $6 or less.

Perhaps most noteworthy is the "stirrup," a sweet or savory handheld victual invented by Morrissey herself. For $4, a large, thin pancake cone gets filled with your choice of three of the following ingredients: bacon, egg, sausage links, potatoes, peanut butter, chocolate chips, berries, syrup and fresh whipped cream.

Giddy Up Breakfast Bar has its grand opening today, October 14, with Kaldi's baristas on hand. Its normal operating hours are 7 to 11 a.m. Monday through Friday.