After the death of the Gyro House's long-time owner Ahmed Eltawmi, the restaurant moved east down Delmar Boulevard near Pi, and Gyros in the Loop opened up in Eltawmi's old location. Some punches were thrown, cops were called, a lawsuit was filed, and needless to say the two gyro restaurants aren't exactly chummy. Signs out front of the two eateries are indicative of the feud: Smiling down from the Gyros in the Loop's sign is a curiously similar likeness to the late Eltawmi, and blazing in neon below the Gyro House's name is "ORIGINAL," lest Loop-goers forget who forged this territory first.

With bad taste lingering between the owners, Gut Check figured we'd wage a battle between the two eateries battle on just that: taste. We pitted the restaurants' namesakes against each other in a battle as epic as Achilles vs. Hector.

The contenders: Gyros in the Loop We popped in at Gyros in the Loop first and ordered their standard gyro. Served open-faced on a pita, the first thing we noticed about this gyro was the tzatziki sauce. It left our mouths watering. Tzatziki sauce is all about offering a cool, cucumbery flavor to contrast the seasoned meat, but this sauce was sleeping on the job. 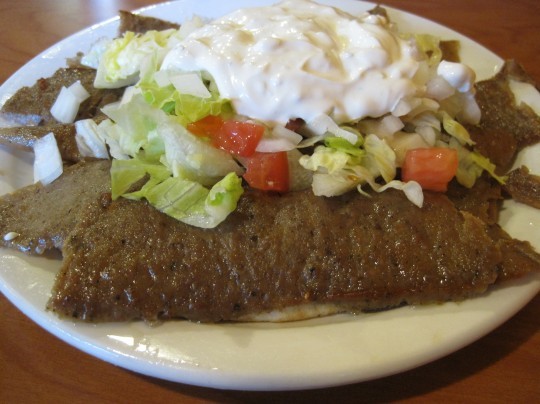 The meat, on the other hand, was expertly shaven off the spit and cooked with just the right amount of crisp and without grease, often the downfall of a gyro. While the presentation of the gyro at Gyros in the Loop had our hopes high, it left us hungry for more flavor.

The Gyro House With a gyro baby in our belly, we marched, er, waddled down Delmar Boulevard for Round 2 hoping for solid kick in the taste buds from the Gyro House. When our gyro was delivered we did a double take: This Greek sandwich looked nearly identical to the one we had just consumed. Also served open-faced, the Gyro House's take sports a hefty dollop of tzatziki that resembles meringue more than a sauce. Now we love creamy, calorie-laden goodness slathered on just about anything, but the Gyro House's tzatziki was too heavy for our liking. (Granted, it did taste more cucumbery than its rival's, and even had a hint of spice.)

Despite the mountain of sauce, this gyro had some kick. A toasted pita and peppery meat pumped up the sandwich's flavor and the crisp tomato, lettuce and onion garnishes left us savoring each bite.

The victor? Strikingly similar in presentation, tzatziki and taste, it was difficult to determine a winner in this feud. In a narrow victory, however, we felt the Gyro House came out on top. The legend of Eltawmi's Mediterranean cuisine lives on: The Gyro House simply packs more flavor.