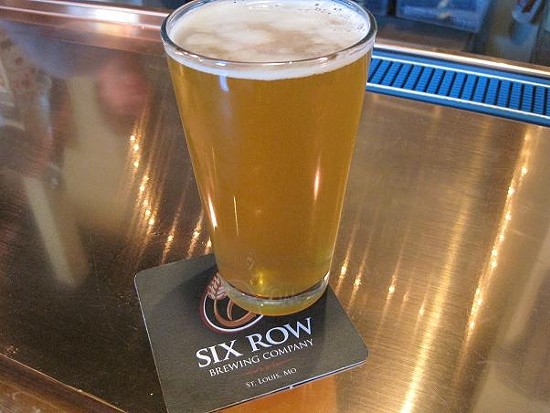 The stars of the beer universe aligned when Six Row Brewing Company (3690 Forest Park Avenue; 314-531-5600) decided to put out its latest release, Plant No. 1 Pre-Prohibition Pilsner.

The midtown brewpub wanted to release its first lager at the same time that it was filling out a new expansion in a building that was once home to the turn-of-the-century beer giant, Falstaff.

Then came word that documentary king Ken Burns was coming to town to promote his new series, Prohibition.

(Hiatt adds they tried to get Burns down to the tasting room for a sample, but unfortunately he didn't show. Another Foo Fighters situation?)

The Pre-Prohibition Pilsner is the brewery's take on what would have been giving St. Louisans a buzz circa the early 1900s. Hiatt says the American premium pilsner was based on the kind of ingredients readily available to turn-of-the-century brewers before the United States outlawed booze.

"Our namesake, six-row barley, would have been one of those," says Hiatt. He also employed flaked maize and German noble hops. The result is a refreshing take on an all-too-common beer in this city.

Watching Pre-Prohibition Pilsner pour from the tap, you immediately notice some differences from the usual lagers. The corn gives the beer a glowing, hazy-golden color. Sips are crisp, clean and complete. It has a peppy floral character with a pleasant hoppiness absent from most American lagers. It left Gut Check's taste buds satisfied and smiling.

Pre-Prohition Pilsner should finish out the month at Six Row, though Hiatt hints that the brewery is considering bringing it on full-time. A pint will set you back $5.