The Famous Bar's Flynn Snider: Featured Bartender of the Week

Welcome to Girl Walks Into a Bar, a weekly Gut Check feature that spotlights local bars and bartenders. This week, Sarah Baraba profiles the Famous Bar's Flynn Snider. Below is a Q&A with Snider, followed by the recipe for a Pumpkin Spice Martini. 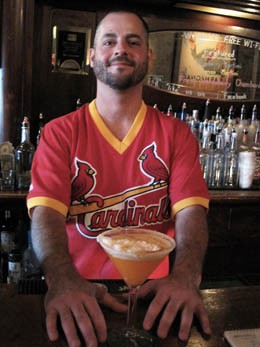 Flynn Snider's brain might as well be the bible of adult beverages. It has to be, given the catalog of handcrafted cocktails at the Famous Bar (5213 Chippewa Street; 314-832-2211). Snider got his start at Schlafly and says he owes a lot of his knowhow to Bud Jostes, owner of Beale on Broadway.

When he wasn't too busy plying his trade behind the Famous' mahogany 1930s-era bar, the fourteen-year-veteran drink fixer shot the breeze with Gut Check about the nuances of mixing, memorization and method.

Describe your bartending style in three words: Methodical. It's a very detail-oriented bar to work in, and you really have to pay attention. Consistency is such a key with any of the cocktails we make; consistency among bartenders has to be absolutely perfect.

Girl walks into a bar and orders a _______. She has just earned your undying admiration. An old-fashioned. I think there's something attractive about a girl who is aware of her cocktails. It's a very hard drink to make. It requires a refined palate.

The most dumbass/ bizarre thing anyone has ordered from you? We have this Swisher Sweets box, and on it says we charge $25. They're, like, $2. We do that to discourage people from smoking them in the bar. They're not real cigars. They're nasty. I had someone last week try to buy a few of them from me, when right next to it we have a huge humidor with awesome cigars.

Other than your own bar, where do you go to get a good drink and what do you get? I like to go down the street to Sandrina's. Usually I'll go in and have a Guinness and Jameson.

What's something most people don't realize about bartending? It's not brain surgery, but it can be a very difficult job at times, especially when you're really busy. Keeping everything straight in your head tab-wise, and remembering drink recipes, especially here where we have a million different recipes. When we're really busy and somebody comes up and orders six different martinis, they don't understand how difficult of a situation they just put me in. Help a brother out and order a Bud Light or something!

What's the most exciting or memorable event you've witnessed while tending bar? I was bartending at a place in Daytona, a biker bar called Boot Hill Saloon. One of the bartenders, his kid was sick with leukemia. A guy came in who had started Hawaiian Tropic, the suntan lotion. He caught wind of the bartender's dilemma -- that he didn't have insurance and didn't know how he was going to take care of his son's medical bills. The guy paid for all of that bartender's son's medical treatments and everything that ensued because of the leukemia. That was pretty cool.

Your bar is the only place in St. Louis where you can... Get a great single-malt beer or a great handcrafted cocktail along with a fine cigar. And some of the most professional service you can find in St. Louis.

For Gut Check, Snider poured a seasonal Pumpkin Spice Martini. This gourd-inspired libation is all about the details, from the graham cracker-crusted rim to the nutmeg-whipped cream-candy corn garnish. Though not as pumpkin-y as the bright orange hue suggests, the drink packs a mouthful of fall flavor with a hint of heat (courtesy of cinnamon schnapps). 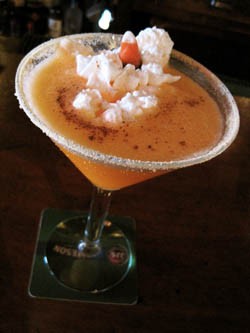