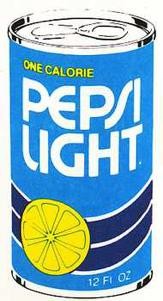 At least PepsiCo had the good sense to not put these flavors on the mass market. They already have enough flavored Diet Pepsi options in their discontinued product graveyard which is starting to rival its retired Doritos graveyard. Because Doritos are made by Frito-Lay, which is owned by PepsiCo.

Sometimes, the retired Diet Pepsi variety comes with its own retired Doritos flavor. It's all about the inter-corporate cross-marketing, People!

Pepsi Light The embryonic stage of flavored Diet Pepsi from the late 1970s/early 1980s. It tasted like 9-volt batteries and lemon Pledge.

Diet Crystal Pepsi Right now you're drinking Diet Pepsi with fake coloring, just as God intended. Pepsi Edge This wasn't a flavored Pepsi, nor was it on the edge. It was in the middle -- half as many calories of regular Pepsi, flavored with Splenda. It was fired for only doing half the job after being featured on the second season of The Apprentice

Diet Pepsi Max As opposed to the currently available Pepsi Max, which is a calorie-free cola product that isn't Diet Pepsi. Diet Pepsi Max was a brief blip on the market a few years ago. Since it was loaded with extra caffeine and the ancient energy-building powers of ginseng, it went flying outta here before anyone in our rampantly narcoleptic society could wake up and notice it.

Diet Pepsi Cease Fire That's right -- lime-flavored Diet Pepsi to compliment Doritos Burn. Get it? Burn? Cease Fire? One's hot. One puts out the fire. It's a match made for the PepsiCo graveyard.