Recent restaurant and food purveyor trends involve a shift in focus to strength in sustainability. At Bixby's (Lindell Boulevard and DeBaliviere Avenue; 314-361-7313), open since April 2010 on the second floor of the Missouri History Museum, the motto "dining with local influence" sets a precedent for a regularly rotating menu ripe with fresh vegetables and accompaniments of the season.

"It's traditional American fare using as much seasonal, locally grown and produced products as possible," says chef de cuisine Todd Lough. "It's a matter of quality and integrity in our cuisine."

Lough has an extensive background in restaurants and hotels that started off under the tutelage of chef Bruno Tison at Ernie's Restaurant in San Francisco. From there, he went on to take executive roles at Turnberry Isle Resort and the Breakers in Florida; his own restaurant, Helen's Place, in Massachusetts; and Busch's Grove. He has been involved with Bixby's and its parent company, Butler's Pantry, since 2009. 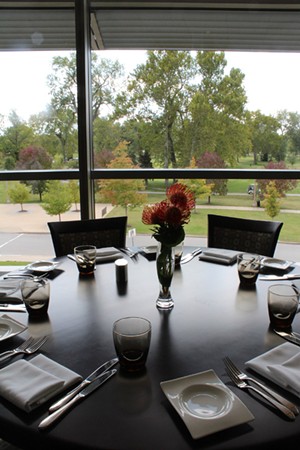 "We started reaching out as early as three years ago with local growers and producers," says Lough. "That's how our theme came about: dining with local influence. We use as [many] locally grown and produced products as possible on the menu."

Bixby's autumn menu debuts this week with favorite core items alongside new accompaniments for hungry Forest Park visitors to try. Expect to see plenty of grains, pastas and different types of legumes on the menu for fall and winter.

"While the menu changes seasonally, it's more like six times a year instead of four," says Bixby's owner, Richard L. Nix Jr. "When the season changes, there's not much warning. You have to react quickly and keep track of what's growing in the future."

Some new plates include a scallop dish with butternut squash and arugula ($12.50) and shrimp soft tacos ($11.50). A Bixby's favorite, Amish chicken ($11.75), will come with Manzanilla olives, roasted fingerling potatoes and onions. A section of the menu also frames itself around the museum's current exhibit. Expect to see some uniquely influenced dishes paired with an upcoming Civil War installation.