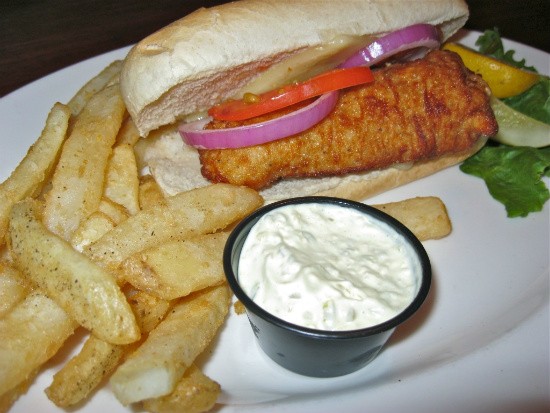 Following closely on the heels of fish and chips in terms of prevalence on any pub menu is the sandwich version - a piece of fried fish on a bun. Fish sandwiches can range from the blah to the greasy, but at Llywelyn's Pub (4747 McPherson Avenue; 314-361-3003), the full flavor of fish shows up in the beer battered cod sandwich.

A flaky, tender piece of white fish is deep fried until just crispy. The batter on the fish manages to avoid being too soggy or too crunchy - it's just right. It's served lying belly-up on a soft cheese hoagie with slices of red onion and tomato. Lettuce, lemon wedges and a bowl of creamy tartar come on the side and the malt vinegar is ready and waiting on the tables. For only $8.95, you can get an authentic fish and chips experience -- whether the "chips" you choose are pub fries, skinny fries or Llywelyn's famous chips.