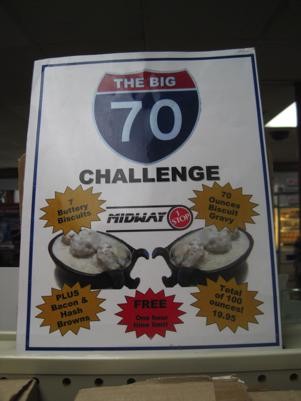 In two weeks the University of Missouri - Columbia will celebrate their one hundredth homecoming, but there's a new character in town encroaching on the Tigers' fame: Midway Truck Stop, the subject of Travel Channel's newest hit, Truck Stop Missouri. The giant, independent truck stop stationed one exit west of Columbia on I-70 is nearly two months into TV fame that shows the best Missouri has to offer - drunken cowboys, LARPers, cheerleader bikini car washes, and haunted budget motel rooms.

Gut Check has a history with Midway Truck Stop. As a student at the University of Missouri nearly twenty years ago, the truck stop's diner provided solace from maddening roommates and the other students pulling all-nighters at Denny's and Country Kitchen. During one wretched midterm week, we might have accidentally written, "Do I dare eat a giant pile of biscuits and gravy with this kidney-shredding trucker coffee?" in a paper analyzing "The Love Song of J. Alfred Prufrock," composed in Midway's diner in the middle of the night.

There was another incident that involved a guy who kept hitting on us at the truck stop's bar. We yelled at him because he was slovenly enough to wear sweatpants to a bar. In retrospect, we're not sure what dress code we were expecting at a truck stop bar on Karaoke Monday.

Midway's diner features an eating challenge that just might be the one that finally lands fellow Travel Channel star Adam Richman in one of Columbia's fine cardiac wards: The I-70 Challenge. It's seven biscuits and 70 ounces of sausage gravy, served in a hog-shaped trough with a side of bacon and hash browns. Eat it in an hour, and it's free.

No, we didn't try it, although we might after a night of throwing back cheap beer and yelling at poorly-dressed would-be suitors in the bar. Except customers have to make a reservation to try the Big 70, since they don't keep that much gravy on hand.

During a recent visit to Columbia, we paid Midway a visit before all the fans in town for Mizzou's 100th homecoming on October 15 wipe out their gravy supply. 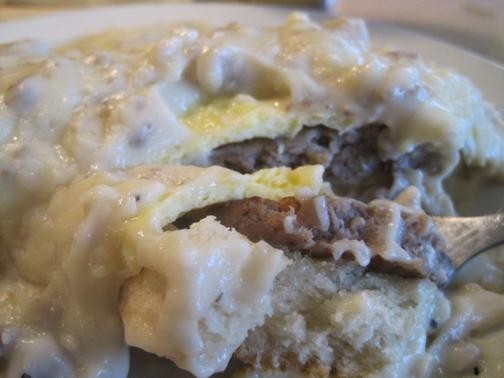 While we didn't have the guts to try the Big 70, we opted to go a bit bigger than standard biscuits and gravy. Midway offers a plate with two giant biscuits topped with sausage patties, scrambled eggs and enough sausage gravy to cover the plate. When it arrives at the table, it's hard to tell there's anything on the plate but gravy.

Fact: there is no such thing as too much gravy. Especially creamy homemade gravy flecked with black pepper and loaded with substantial chunks of sausage. Leave no gravy behind, even when the biscuits are gone. It's spoon-worthy gravy, and the only thing stopping us from the Big 70 is the human stomach's ability to only hold 60-132 ounce at a time. The Big 70's total girth of 100 ounces is getting a bit too close to stomach rupture for our liking.

The biscuits held up to the gravy's heft without being doughy or tough. Even with the gravy, a light butteriness from the biscuits came through. They don't skimp on the sausage, either. Thick patties are slightly crunchy on the outside and filled with red pepper and spices.

Only the eggs were a little disappointing, but that could be our personal preference for fluffy scrambled eggs. These were more like an unfilled omelet, and just a smidge over-cooked. They didn't add enough flavor or texture to the overall dish to be worthwhile. Swapping them with eggs over easy would make an excellent truck stop-style Benedict, though.

The coffee's rich and strong, and the servers friendly, going so far as to go in search of owner Joe Bechtold when they learned that Gut Check Jr. is a huge admirer of his. He was taking a rare day off, but still. The sentiment was sweet. The whole staff seems a bit bewildered by their sudden cult fame, but it's still the same Midway that we remember - friendly, a bit quirky and still one of the best places to get breakfast at any time.