Drive and Carl's Drive In 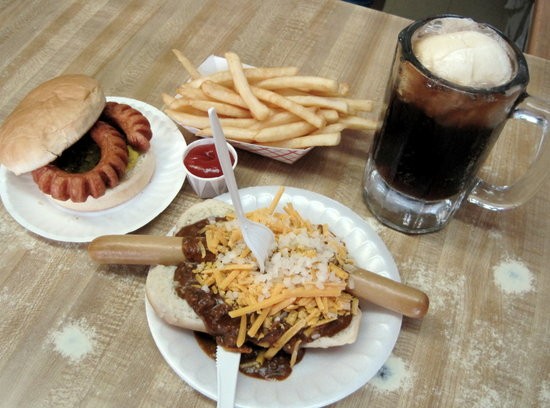 After the first scene of Drive, you'll be left thinking three things: this is not going to be your standard car flick; does Ryan Gosling have any lines?; Urban Outfitters is going to start selling a lot of driving gloves.

Those scattered thoughts aside, the first scene will have you on the edge of your seat after watching Gosling (whose character is only listed as "Driver" in the credits) not escape cops in a high-speed, spark-flying, bullet-dodging pursuit, but rather in a smooth, almost too relaxed manner that has you more satisfied than witnessing a souped-up Mazda get crushed like a beer can. That's because Drive is less about pumping adrenaline than it is about re-stylizing a genre with quality performances from a talented cast.

Gosling stars as a Hollywood stunt driver/mechanic by day -- getaway driver by night. After igniting a friendly romance with his neighbor (Carey Mulligan), Gosling gets wrapped up in a heist-gone-wrong, attempting to help Mulligan's ex-con husband (Oscar Isaac) repay a debt to the mob.

In Drive, the suspense doesn't come from chase scenes or car wrecks. Rather, it comes from Gosling's character's controlled demeanor, knowing that if he doesn't get things right, it's all over. Director Nicolas Winding Refn succeeds in orchestrating some of the best on-screen violence we've has seen in a long time, from a (literally) mind blowing scene in a hotel bathroom to a spur of the moment fork-to-eye assault courtesy of Albert Brooks. Drive is also expertly stylized; retro vibes ring from the pink font in the credits, Gosling's satin Scorpion jacket and the synthy pulsing score.

To digest Drive, Gut Check decided to head to Carl's Drive In (9033 Manchester Road, Brentwood; 314-961-9652) for an all-American diner dish. We opted for some of Carl's hot dog delicacies, and ordered the Curly-Q (a spiral cut, deep-fried hot dog served curled on a hamburger bun with mustard and pickle relish), as well as the foot-ling chili dog.

Carl's Drive In is about the size of a car. Squeezed between two counters is a grill, a very large keg of I.B.C. Root Beer (which naturally convinced Gut Check to order a root beer float), and a handful of bustling grill cooks. Because the grill is an arm's length away from your stool, nothing is left to the imagination in the way of food prep. When our order was up, we were mildly concerned by the nearly white hot dog smothered by a pool of chili, cheese and onions. Appearance, however, took a backseat to flavor in this dish. The chili packed a surprising amount heat, and our root beer float did a quality job extinguishing it.