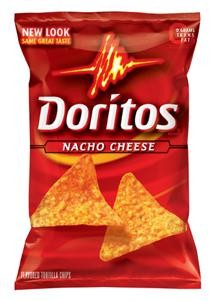 As Ian reported yesterday, Arch West, the 97-year-old Texan who blessed the world with Doritos in 1966, passed away last week. His family plans to sprinkle Doritos into his final resting place.

While we wish no disrespect to West or his mourning family, we hope they won't be burying these beloved, discontinued Doritos flavors with him. If ever there was a time when Americans needs to stress-eat their long-gone nostalgic favorites, it's now.

Just look what happens in a world without Doritos. (Especially weirdly flavored ones.) it's not good!

Doritos Pizza Hut Cravers PepsiCo owns Taco Bell, Pizza Hut, and Dorito-maker Frito Lay, which explains why Taco Bell and Pizza Hut-themed Doritos have existed. They also own KFC. We don't understand why we haven't been blessed with a mashed potato and gravy-flavored version.

Sour Cream and Onion Doritos These days, it's all about how much heat and ridiculousness can be crammed into Dorito dust. Spicy Sweet Chili! Third Degree Burn! We'd like to return to a simpler time, when the fieriest flavor available was the tearful sting of an onion.

Fiery Habanero Doritos In case Arch West is punished for all eternity for the ravages his invention inflicted on human health, it would serve him right to be buried with these heat blasters.

Munchies News of the World