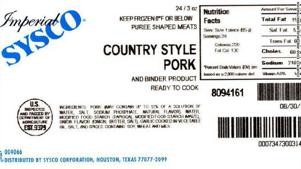 It's officially no longer safe to eat anything.

Cantaloupe continues its rampage. The death count from listeria-contaminated Rocky Ford cantaloupes is up to sixteen, making it the deadliest food-borne illness outbreak in over a decade. One death occurred in Missouri.

The cantaloupe recalls continue. Carol's Cuts LLC in Kansas City has recalled 594 pounds of cut-up cantaloupe sold in five-pound trays and eight-ounce mixed-fruit packages. They were sold in Missouri, Kansas and Nebraska. No listeria illnesses have been linked to Carol's Cuts, but the company used Rocky Ford cantaloupes linked to Jensen Farms in Holly, Colorado.

It's not just melons that are out to get us. Meat recalls also abound this week.

K. Heeps Inc. has recalled a product we probably shouldn't be eating in the first place: puréed pork products. And we're not talking about country pâté. The 5,550 pounds of recalled pork were sold as 4.5-pound boxes of Imperial Sysco "Puree Shaped Meats Country Style Pork and Binder Product". They were recalled because two customers found small metal fragments in the product. Missouri was among the states affected by the recall.

Beef's not safe, either. Tyson has recalled 131,300 pounds of ground beef for possible E. coli contamination. The beef, sold in five- and three-pound chubs, wasn't sold in Missouri or Illinois.

Cargill confirmed yesterday that the 185,000 pounds of ground turkey recalled on September 11 were definitely infected with antibiotic-resistant salmonella.