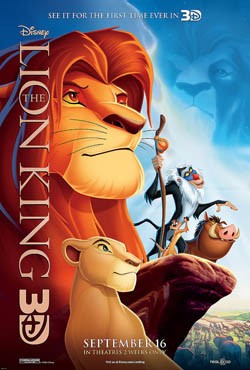 Most things that seemed amazing to us as children are disappointing when revisited by our grown-up selves. Our favorite childhood foods? Totino's Party Pizzas, grilled-cheese sandwiches made from slabs of Velveeta and an interesting concoction our mom used to make with an As Seen on TV sandwich maker that we called "blueberry things" -- needless to say, they don't hold up. (OK, Totino's pizzas still occasionally sound fantastic under the influence of alcohol.) Our favorite childhood movies, however, are timeless.

Which is why we chose to see Lion King 3D at Ronnie's (20 South Lindbergh Boulevard South; 314-843-4336) on a Monday evening with another adult, when we could have (or should have) been doing any number of decidedly more grown-up things, such as washing the impressive tower of dirty dishes growing in our kitchen sink or paying bills. No, we opted to bypass those mundane adult responsibilities for a day and bask in childhood memories and Disney magic -- now with an extra dimension of trauma and heartbreak.

As we look back on the animated classic, Mufasa's death is what stands out. The realization that your parents are mortal (and your creepy uncle might not be so harmless after all) despite their powerful presence in your life is undoubtedly a tearful and terrifying one for a child. Of course, this moment's even more traumatizing for a child who's lost a parent. Or for adults who've lost a parent, for that matter.

It's a fucking devastating scene.

So devastating that we forgot about how cool Rafiki is, and how genuinely funny the hyenas and Timon and Pumba are. Seriously. The group of hipsters next to us was laughing out loud and singing along -- unironically -- sharing in and justifying our nostalgia. The little girl in the front row was singing along, laughing hysterically and shouting at the screen. And we may or may not have been, too.

Little runaway Simba's found by Timon and Pumba, passed out and starving. While the only trauma we suffered was waiting an extra two hours for dinner and maybe weeping just a little bit in a movie theater, we felt we could relate.

Of course, we opted for Lion's Choice. A cheap, quick, relatively hearty meal. Is it amazing? No, not at all. But when we were starving and in need of comfort food, it was just what the baboon shaman ordered. Would a lion choose to eat roast beef sandwiches, french fries and root beer over grubs? No doubt.