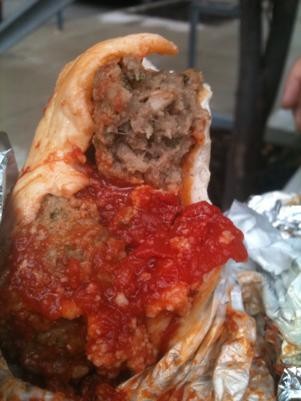 For the past few weeks we've been a little obsessed with Schweddy Balls at Gut Check. But we've matured since then, moving past the childishness of double entendre-laced ice cream.

The good folks who brought falafel to the streets of St. Louis with the Falafelwich Wagon are in the process of getting a second truck on the road. It's called, awesomely enough, Big Balls, and promises to offer all sorts of food in ball form.

In the meantime, Falafelwich has been giving previews of their big meatballs in sandwich form. It's worth the giggle fits that come with telling the Falafelwich guys that you'd like a taste of their big balls.

The sandwich is no joke. They're calling their homemade bread a French hoagie, which is an apt enough description, but doesn't convey the bread's tenderness. Lacking the French bread crust, it's soft enough to bite without winding up with balls in your lap, especially since the loaf's not split all the way through.

They start with a layer of mild, white cheese. It's not stringy or greasy; just a good-quality white Italian cheese that doesn't overpower.

They're still tinkering with the sauce, but what we tasted on Friday was just fine - a bright, fresh marinara with visible dices of tomato, Parmesan, and chopped basil that packs a complex, tangy punch.

Between the cheese and sauce? Balls. But not overly big balls, which is fine. Average-sized balls suffice, especially when they're fresh, lightly seared, and not made of pulverized meat. There's just enough grain to the meat to give the balls some heft to match the flavor, which is beefy, slightly porky and loaded with roasted garlic.

With street food, portability's a factor. The Big Balls sandwich has it down pat. The well-balanced sandwich isn't overstuffed and can easily be eaten from its foil wrapper while sitting on the steps of the Old Post Office.