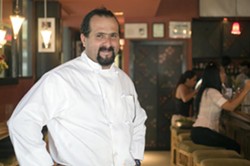 Gut Check reported at the end of August that Coco Louco Brasil (512 North Euclid Avenue; 314-367-1600) was closed for repairs and that owners Jorge Carvalho and Rachel Carvalho were facing multiple legal issues, including state and federal tax liens as well as felony charges of  "willfully" and "with intent to defraud" failing to pay and/or report sales tax.

Coco Louco never returned the messages that I left when working on our original report, so I had no idea that the restaurant had reopened until I happened to drive past it just after noon yesterday and saw that it was apparently open for lunch, with signs outside advertising its lunch buffet and Sunday brunch.

The recorded greeting on the Coco Louco's voice mail has been changed from a message about those repairs to a standard statement of the restaurant's hours and a request to leave details for your reservation.

I left another message. More as I learn it.

Carvalho confirms that the restaurant returned just over a week ago. During the restaurant's closure, she and her husband dealt with the tax issues facing them. "We've taken care of that," she says, adding that having done so feels "wonderful."